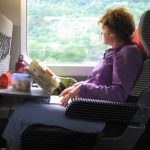 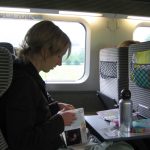 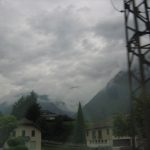 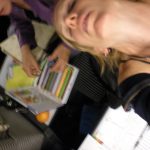 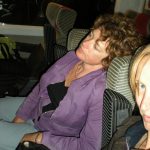 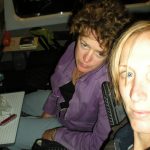 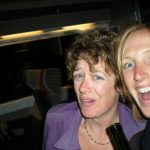 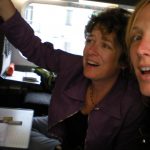 We had to rise very early to catch the train yesterday. I was so sad to leave Paris. I had really fallen in love, but as C said, “the reason I’m not sad to leave Paris is because I’m going to Italy!” We rode 1st class, which was special and although we were kinda bummed to travel with the stuffy old people, it was nice to have the space. We brought a picnic lunch, with bottle of wine. I read for a while and wrote in and decorated my journal (just wait until you see it!). We drank the whole of the wine. It was only noon. The countryside was absolutely beautiful. Cynthia needed to get my attention for each passing scene: the lake with the most picturesque fishing boat, the fog in the green hills, the tiny French village and the Alps. It’s still so surreal. By the time we reached the longest tunnel in the world, the language changed and now the few words I’d learned in Paris were no longer very useful. 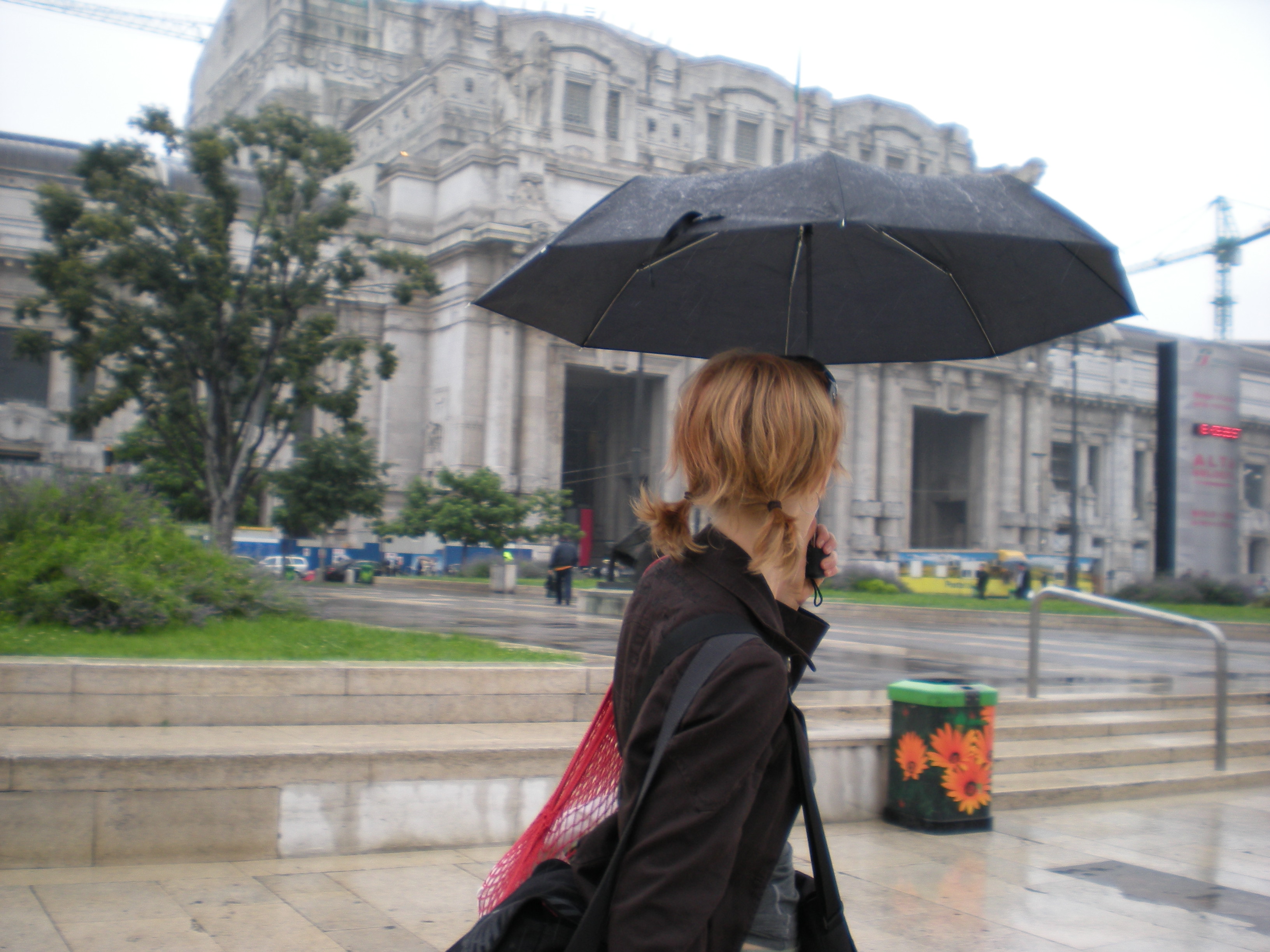 Welcome to Milano
When we arrived it was raining. I saved .80£ by deciding to wait to pee. Our host was only a few blocks away. We could skip past the umbrella salesmen because we’d already invested in Paris. Cynthia rushed ahead reading street signs while I hobbled along with 3 bags and an umbrella. I’m lucky to have her. I know that it’s a shame that it’s raining here… but I guess it’s better for it too be raining in Milan than to be raining in Florence (notice how I speak in broken English now. I’m a chameleon when it comes to accents and things, I wish the words came through osmosis like this). It might be raining in Florence, I don’t know… but it’s okay, because I’m not going there. 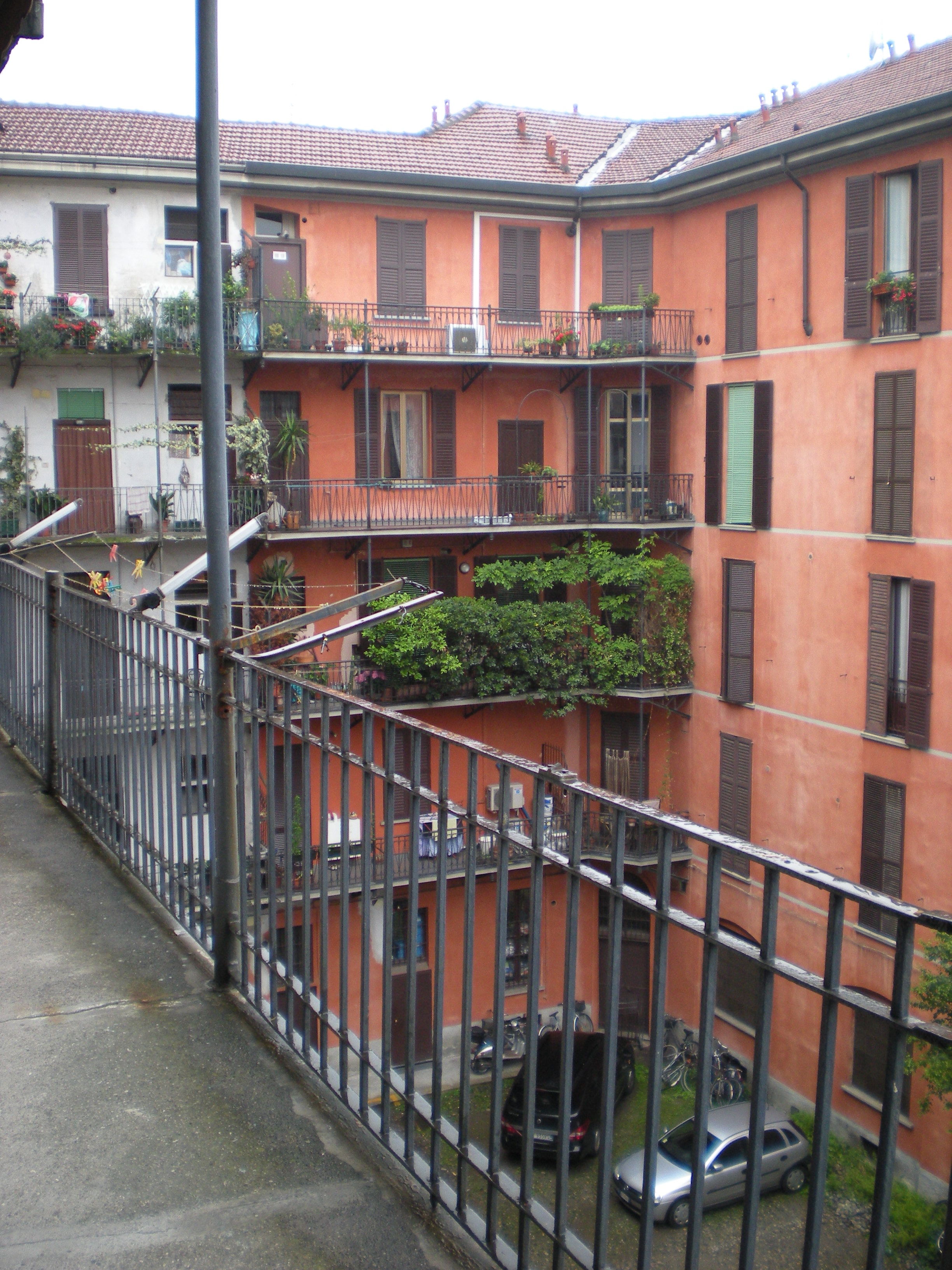 Our host, Carlo, is totally confused about why I came all of the way to Italy and will only see Milan. But I know that we made the right decision. Milan and Germany have nothing on Florence’s art and beauty or Tuscany’s food, but it’s the culture in Berlin that I’m most interested in. If I could do it all, I would, but I only have so much time and have to get my priorities strait. I’m realy excited about Berlin.  Anyway, people familiar with Italy don’t think that Milano is very interesting, but I have to say, I’m impressed, regardless. 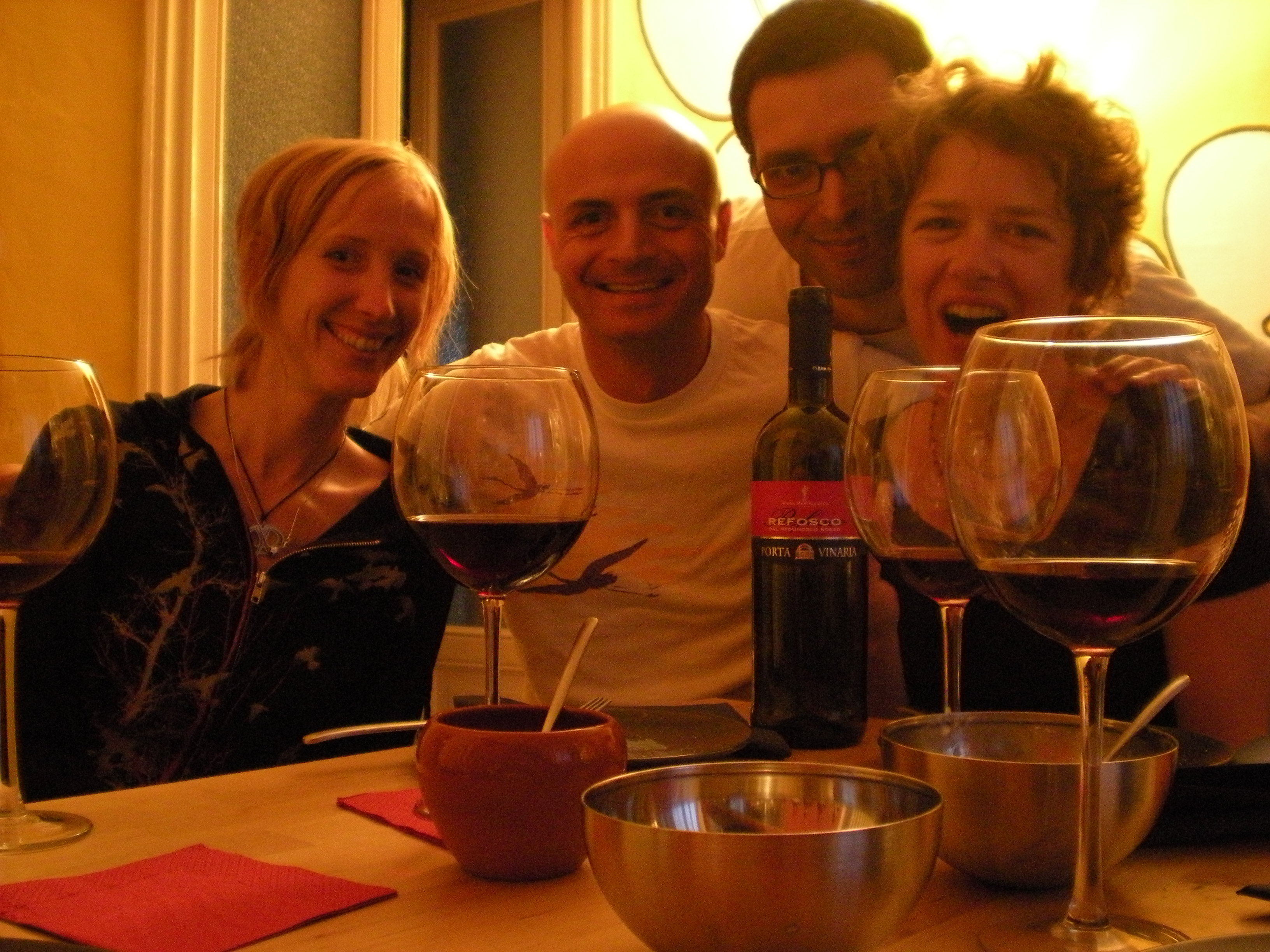 Our host flat is so perfectly located within walking and tramway distance from everything worth doing in Milan. When we arrived at Carlo’s flat, he was waiting for us with hot tea. He’s a man of style in every way. We couldn’t have asked for a better host. We were given a key so that we can “free in and out”, a comfortable bed with clean sheets and some time for a nap (something that is much needed after a bottle of wine at noon on a train).  Two hours later I awoke to Carlo’s flatmate coming home from his day with groceries. Within a half hour we were sitting down to apertivo, something that is not taken lightly in Milan. We enjoyed spec, fromage blanc, bread sticks, olives and the most superb Italian wine while we decided on where to go for dinner.

Cynthia and I were keen on pizza, I mean look where we are! and of course, gelatto after. Our wish came true and we had the best Pizza of our lives.We weren’t so lucky with the Gelatto, because it was Monday and nothing was still open at Midnight, how odd! JK 🙂

I convinced Carlo to agree to wake up early and run with me. I have only had walking exercise since I’ve been here and thought it would be nice to move my body in a new way. The rain convinced me to stay in bed until 10 instead. We stretched and shared biscuts with Carlo. 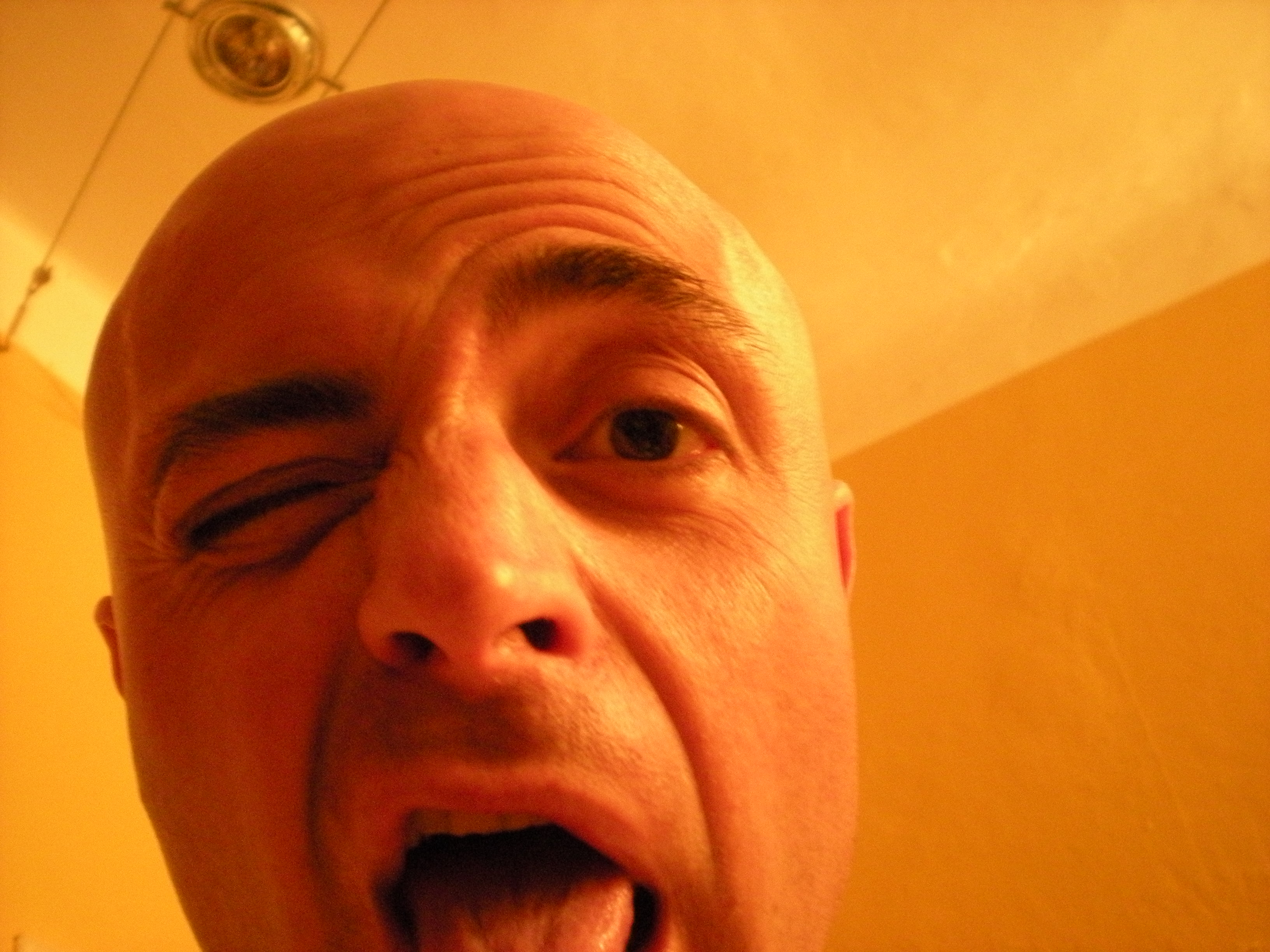 He’s a freelance graphic designer, like me. He’s 35 like me… but I’m a few days older. He’s very very kind and sweet, but somewhat sad it seems. Or maybe it’s those great big Italian eyes(?). No, actually, he is a little sad. He is sick of Itally altogether and wants to move to San Francisco. He explains that the prime minister here (Berlesconi?) is a crook. “So is our president!”, Cynthia and I exclaim, but Carlo says that this is different. “Bush is a crook, but he looks like a nice man!” Berlesconi (or whatever) was a crook before he was elected. He was waiting for 12 trials at the time. Since elected he changed the law so that he was only waiting for 4 and since then has postponed them for so long that he doesn’t even have to worry about them anymore.
The obvious question is “why then do people elect him?” To this, Carlo answers “I don’t know!” Carlo really wants to get out of here. His additional complaints include, the assembly at his appartment complex where he owns his flat and their unwillingness to pay in to make improvements, the other citizens here and their senseless accusations of others when they themselves and so obviously guilty and then there’s his work.
He’s been waiting for 9 months to get paid for  work that is now completed. He’s only been given 20% and only after 90 days. He’s paid money out for this work… but it doesn’t matter. I’m excited because I feel like I can help with this, I’ve been advising colleagues on how to write a better contract for years, right? He says, “no, we can not have a contract in Italy.” What? No contact? It’s crazy, I agree. But they have their choice on who to hire and if you insist that they sign a contract, you are not the designer for them. I argue that the contract is good for everyone… “but they don’t understand this!”, Carlo exclaims in frustration. 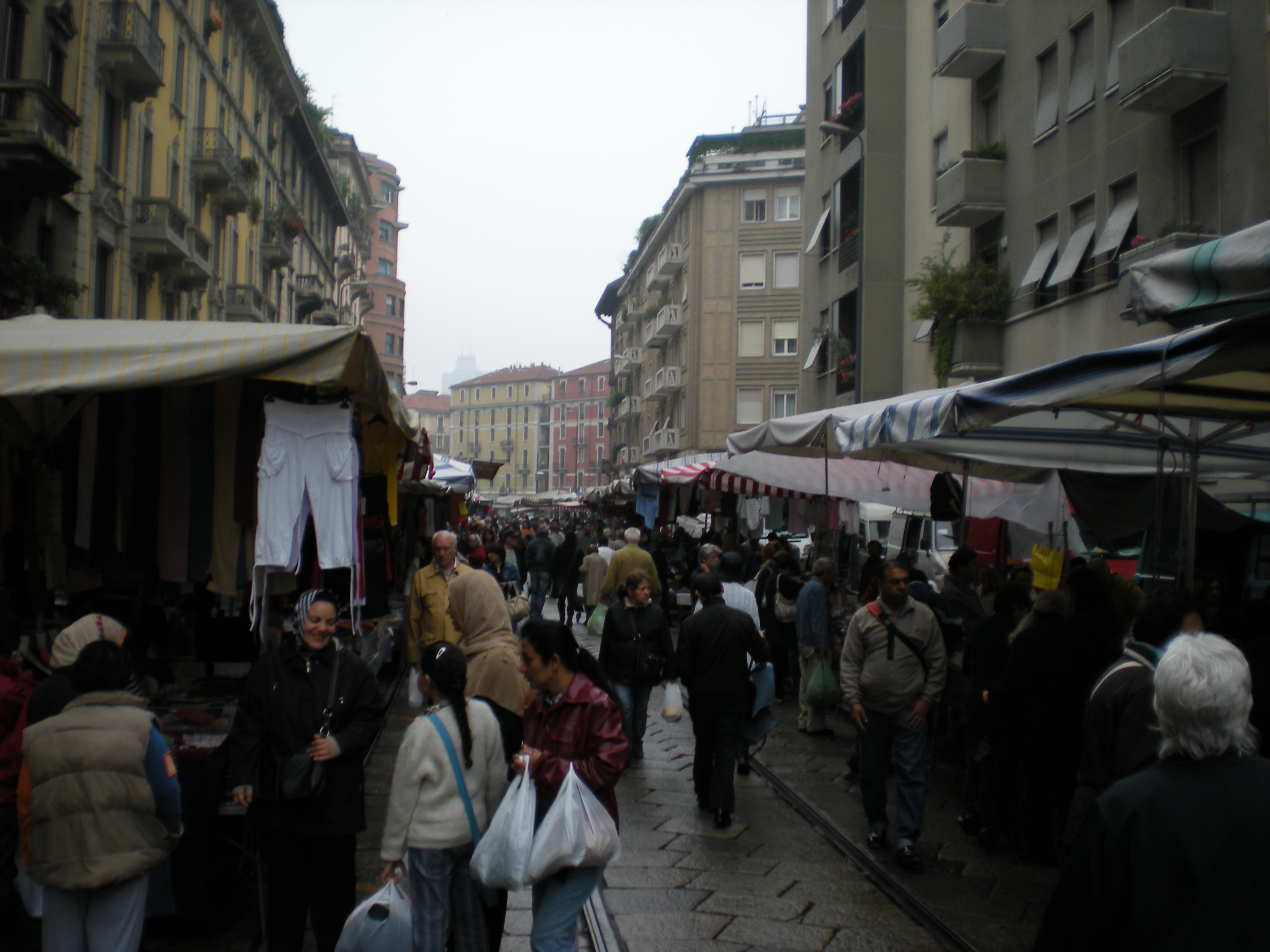 Oh and one more thing that totally sucks: Once he did a huge job for someone, worked weekends, etc. and didn’t get paid at all. Sure, same same, happened to me too, of course… but here’s the rub, he has to pay taxes with the invoice, not the payment. So it costs him money to work for those assholes. Arrgh. Poor Carlo. It might be hard in San Francisco, but it’s worth it.

So, Carlo and I agree. He might be too nice for this country. 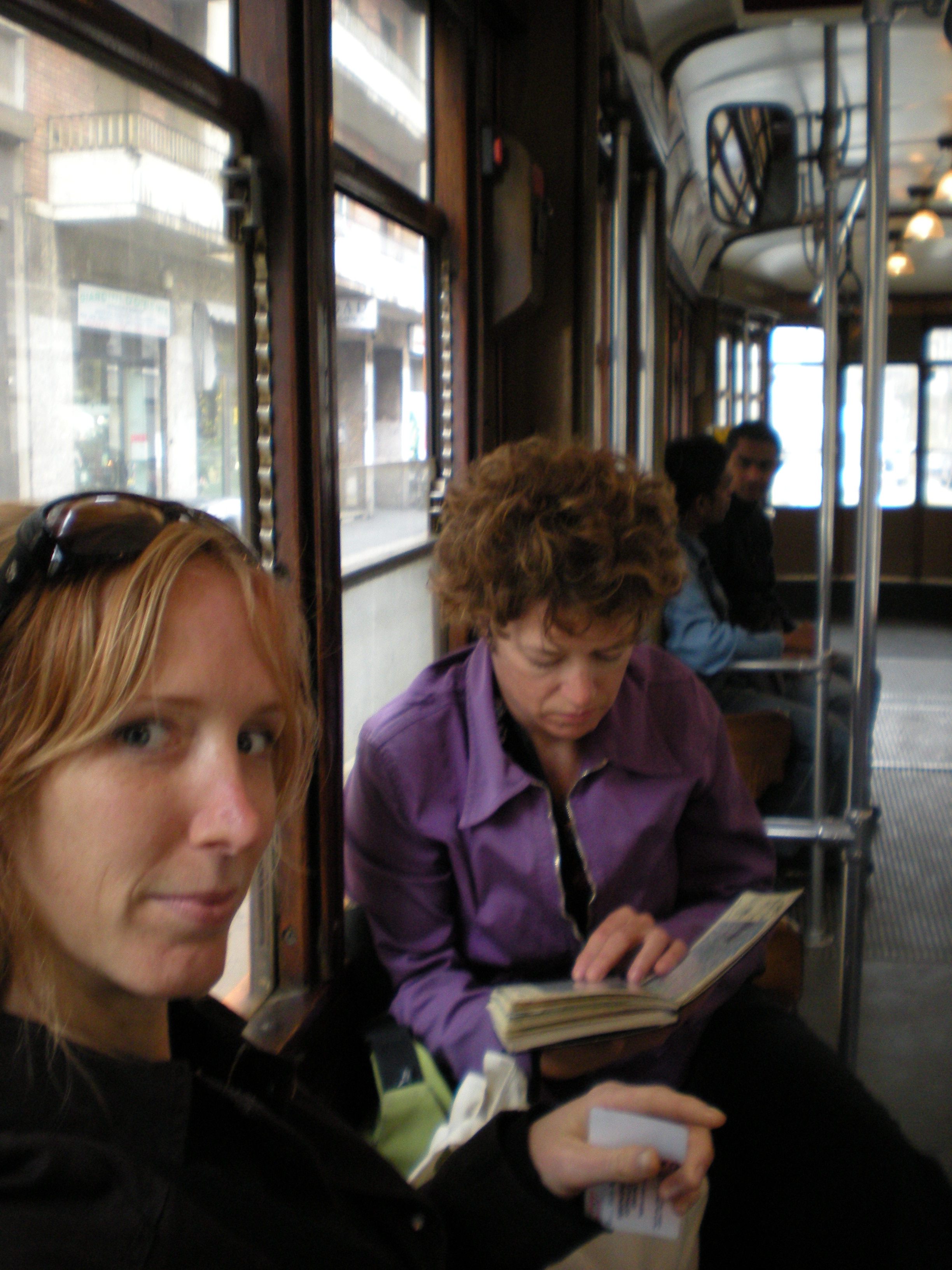 Our day in the City
C and I headed out to soak up a few hours of the city today. We had an agenda of Duomo (the church), Panerotto (a special kind of Pizza) at Luini, Gelatto and shoe shopping for me. Roberta, another couch surfer that joined us for dinner last night, conferred with me about my NEED for Italian shoes. “It’s a basic need”, she agreed. So basic that maybe I should find two pair! But as luck would have it, nothing was perfect enough to justify the cost. I’ll need something more than these Keen for the dance scene in Berlin, which is coming so soon, but not from Itally, not in the one day we have here. 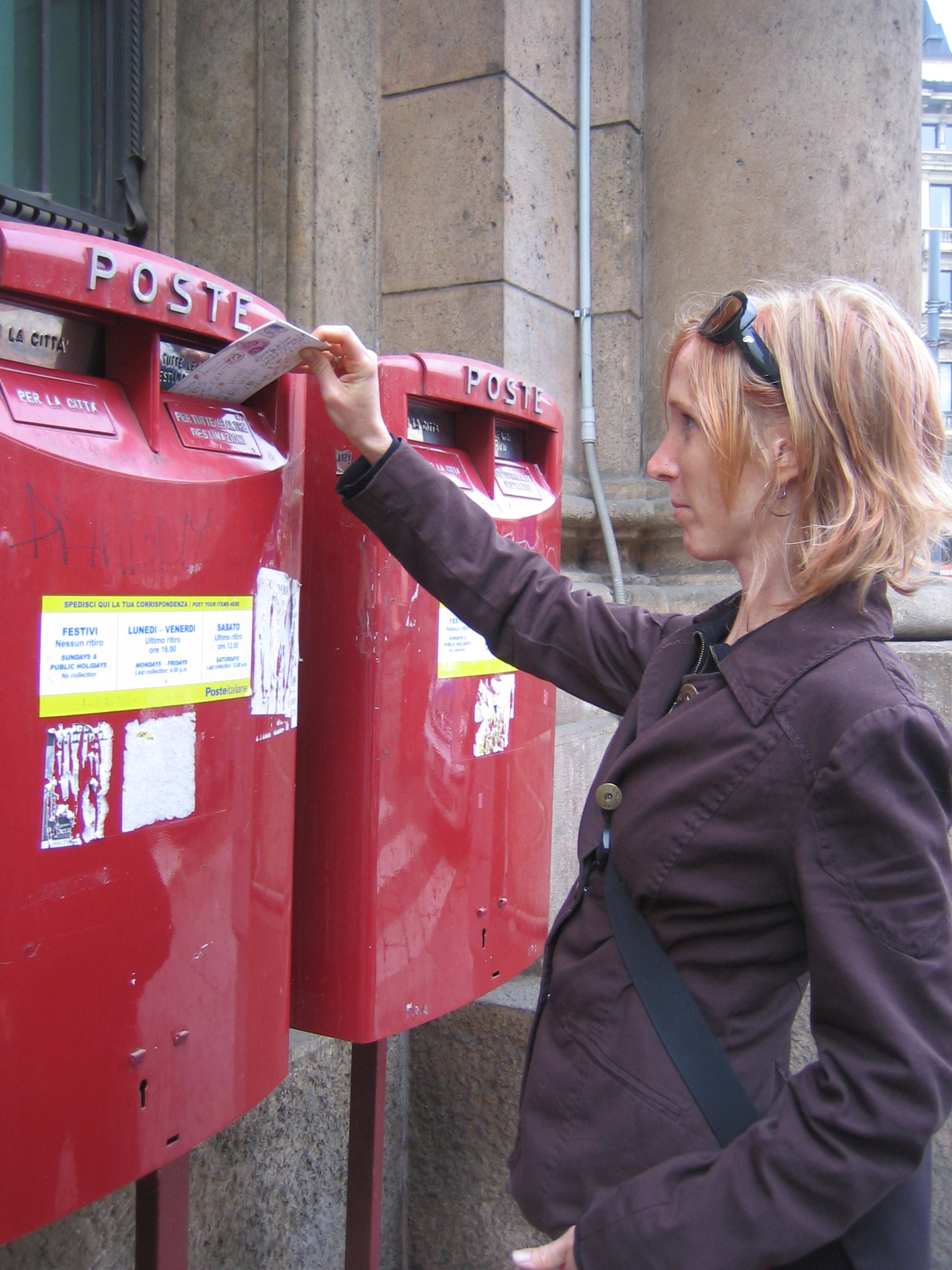 On the way downtown, Carlo joined us for a trip to help us at the Poste on the way. We waited 15 minutes to ask a question at the Poste, which demonstrated Carlo’s excessive niceness, in a real life situation in this city. He is very considerate, which doesn’t really seem to count for much here, but I’m sure it counts for something in the higher sense of the concept of self. The rain made me want to just head back to the flat and catch up on my blogs, but Carlo said that I must see Duomo and the city. 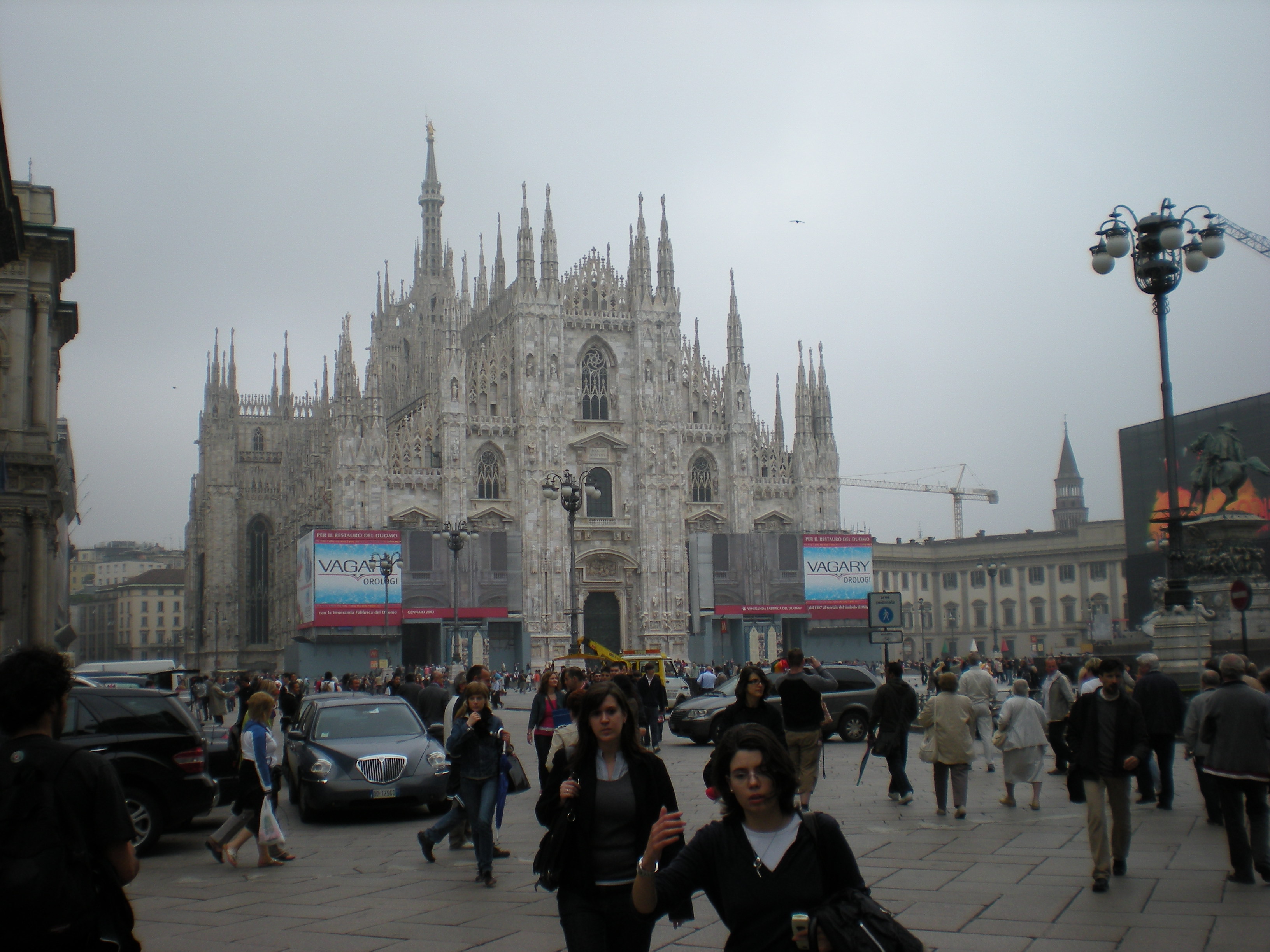 The closer we got to Duomo, the more tourists we saw. I grabbed a coffee, just before we rounded the corner where Duomo became visible. OMG. Totally overwhelmingly beautiful! If this building and this place is nothing compared to Florence, maybe it’s better that I’m here. Add a little shot of espresso and my heart is ready to explode at the beauty of these massive, old buildings built with more passion than I can even imagine possible. To see this building in the distance (and the city is designed so that all of the other buildings frame your view of it) is absolutely unreal. Is it OZ? 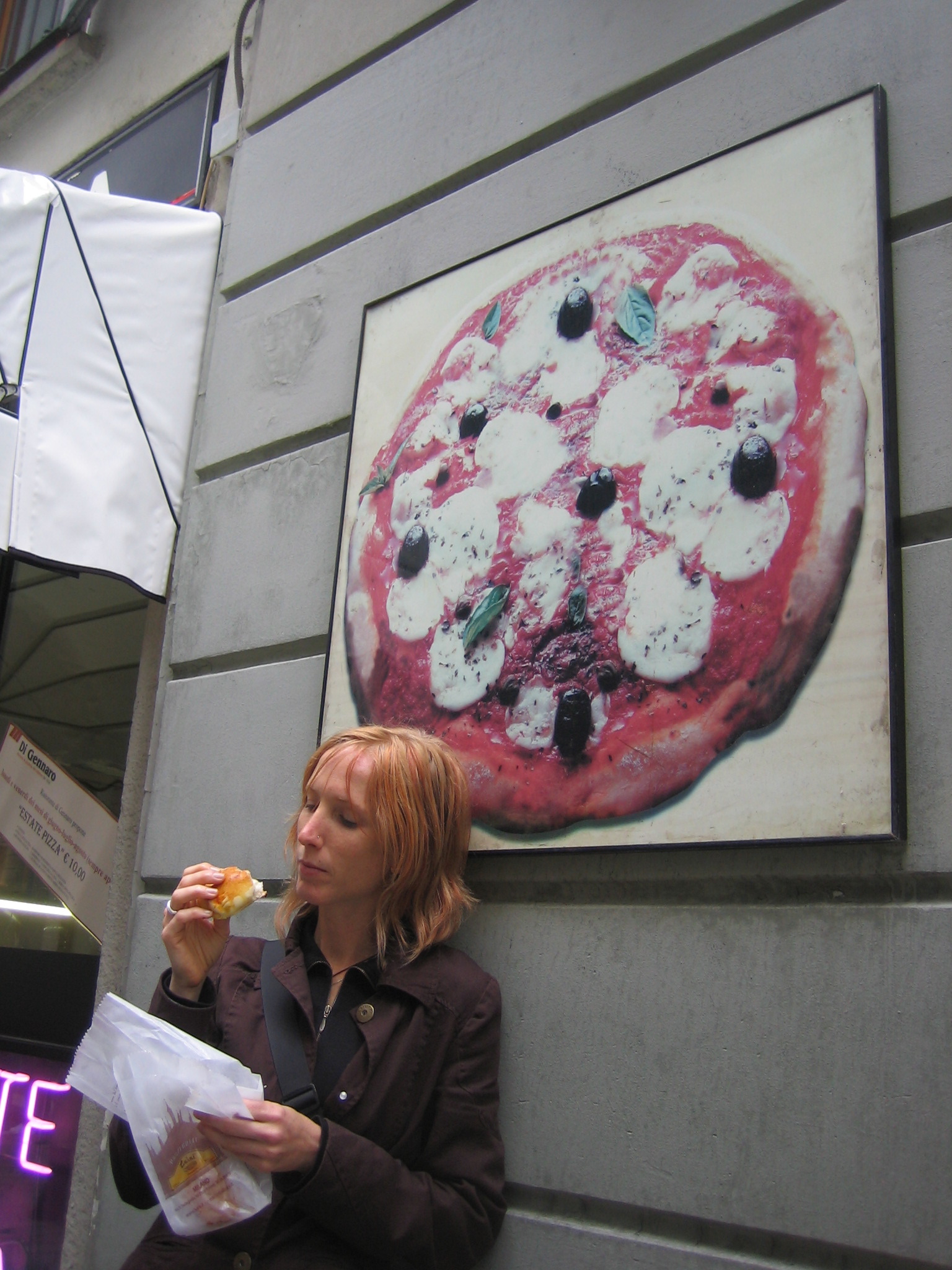 I saw more style in Paris, I think…. but maybe it’s all of the tourists that I avoided in Paris and saw here that throw the average for me. What I did notice in this city, the Fashion Capitol of Italy, is how dressy people can be when they are just casual. I saw a waitress at the little corner cafe in a silk black blouse with puffy sleeves and with a bow in her hair. She looked awesome. If I owned something like that in Denver, I’d worry that I would never get the opportunity to wear it. “Italian men in suits are HOT,” Cynthia said. “Not all of them… but that one is… and that one… oh and…. uh yeah, whoa”. The men here are not all eyes and grabby, the way that I was warned, but I do have a special talent (read: blonde hair, long body and generally flirtatious attitude) for holding their glance for a few moments. MMMMmmm mmm.

Radiohead
This is what we’ve been waiting for. Tonight is the night. Carlo will join the CouchSurfing people outside for beer, where they will be able to hear a little bit of the music and enjoy the company of other Radiohead fans who couldn’t afford a ticket, or didn’t get theirs in time. We will join some other couch surfers and CS hosts inside. Yes, it’s still raining on and off. But I seriously couldn’t care less. It’s not cold and rain goes perfectly with melancholy music. I’ll tell you all about it soon!