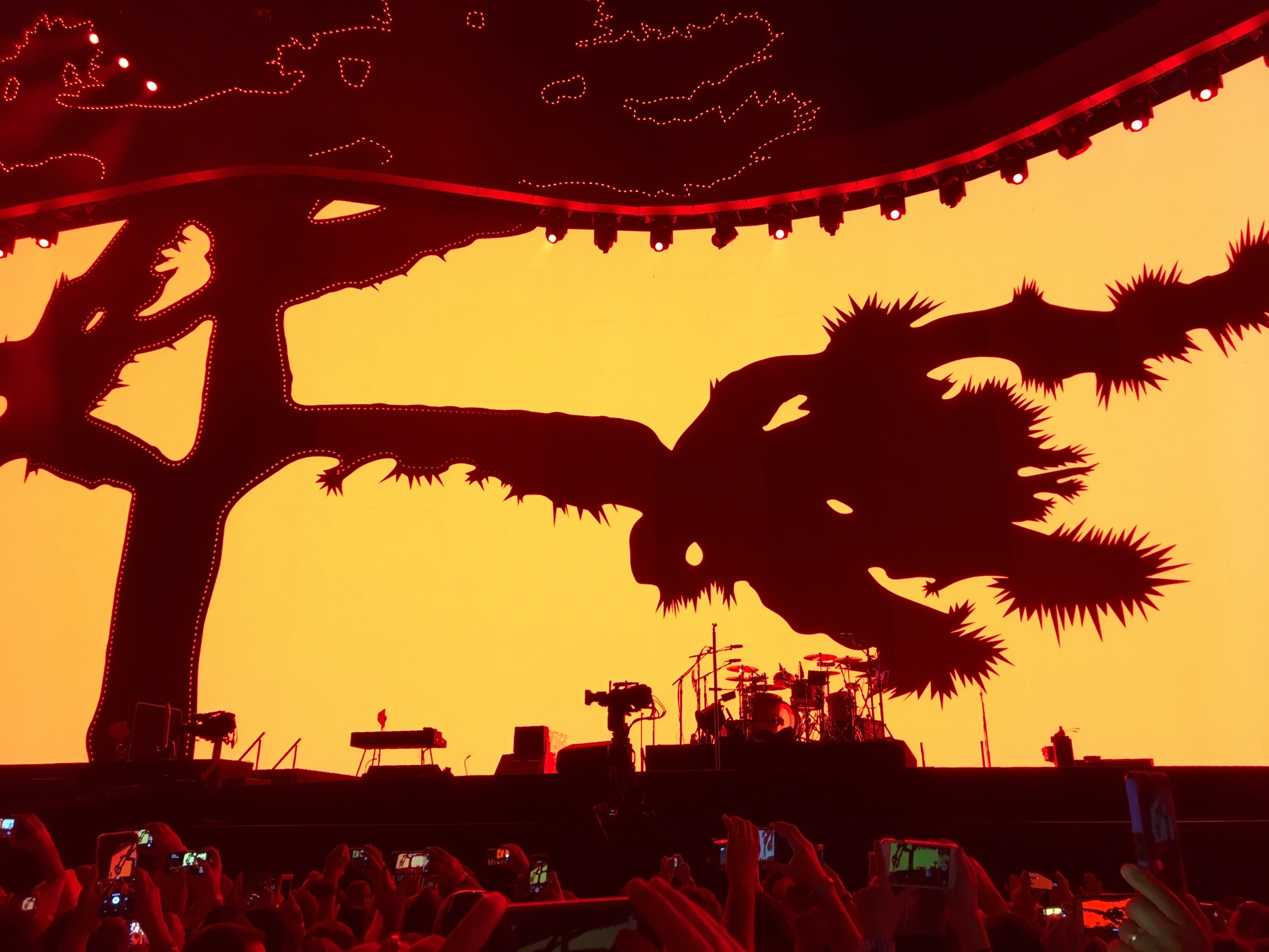 U2 and Forever Hope for Freedom 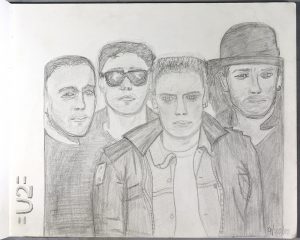 Last summer, when my fella asked me how I’d feel about going to see U2 on their 30 year anniversary tour for the album, The Joshua Tree, I responded by saying, “If I don’t cry during that show, I’ll know that my soul has truly died”.

Thirty years ago, “With or Without You” was the feature slow song at my Jr. High Homecoming dance. I was 14. I held to the edges of the school cafeteria, in fear of doing or saying anything not acceptable of the most dangerous of my peers. But when that song came on; you know how it goes, the one guitar comes in like a little, distant chiming bell, the bass enters and lets you know that this is serious, and then The Edge enters and pulls at your heart strings like they were his guitar. By the time Bono’s  vox moves into the spotlight, you’re swept up in the longing and the depth.

And you give yourself away.

The room spun with little flecks of light and my awkwardness was momentarily suspended, replaced by a music-trance and the sense of love and hope. Not so coincidentally, I was, asked to dance.

The year was 1987. I got a CD player and with it a copy of The Joshua Tree, for Christmas. If grooves could have been worn into that shiny little disc by the laser focus of my total attention! Everyone seemed to like U2 after that album, at least everyone that I knew. But I LOVED them, and even if you did too, my story is a little different.

In 1988, my friends and I went to see the documentary “Rattle and Hum”, as soon as it was released in Miami theaters and then again and again. I cried through the entire Red Rocks Amphitheater part. My teen angst hadn’t quite hit yet and so, I didn’t exactly know why it felt so deeply meaningful, I just felt it. And it felt good to be allowed to cry and feel what I felt.

I immediately went out and bought two of their previous albums, War and Unforgettable Fire and fell even more deeply in love.

I turned 15 that year, which brought about my change, in more ways than one.  I had been breaking under the heaps of pressure to fit in, in middle school. I already knew what would happen if I didn’t. Out of sheer fear, I studied the pages of 17 magazine, smeared on a thick layer of foundation makeup every day and did my best to disguise the fact that I only owned one pair of Guess jeans. I smiled, hid how I really felt and was so so afraid, until an unlikely hero, my drama classmate, hippie, girlfriend, exposed me to a way of being that looked a lot more like freedom. A personal exploration was underway and it needed a soundtrack. The Madonna, Phil Collins and Beastie Boys of my music collection weren’t it. The likes of my favorite band, U2 might have held the keys to the meaning of life and I was ready for them.

I listened, from inside of my own room in a home increasingly filled with limitations and disapproval. I made my mother listen with me once, hoping that it would bridge the ever widening crevasse between us, like it seemed to do for space between who I ‘really’ was and who I used to be. I prayed The Joshua Tree would at least remind her of a universal dream of freedom, because that’s all I really wanted, freedom. She just wanted her “normal” little girl back. She didn’t seem interested in freedom, especially not mine.

That summer, I was happily shipped off to summer camp, with a fresh, puffy-paint peace sign on my t-shirt, in honor of my new mantra “peace, love and happiness”. Nestled high in the Colorado Mountains, at the familiar Anderson Camp I decided that I would, for the first time ever, familiarize myself with who I was when I was not being pushed and shoved by the people that I loved, to be someone who they wanted me to be. Amidst the open landscapes, the beautiful mountains, and the mountaineering types who ran that place, I felt some of the freedom I yearned for.

She is liberty and she comes to rescue me.

Peace signs, hearts, yin-yangs, anchs, and fairies covered the walls of my bunk, and were drawn on my jeans and in my journal. They were my totems to living freely and differently. I often skipped instead of walking and put flowers in my hair. This new way of being was on a different plane than campmate drama, which was present right away. As the hippie girl, I was the obvious outcast. The thing I had recently feared most was happening and I’d never imagined that with my headphones on, I could care so little.

If I could, yes I would
If I could, I would
Let it go
Surrender
Dislocate

I enjoyed being alone. In my downtime, you could find me on the hill by the creek listening to my walkman. To the tune of my favorite albums that I’d burned onto tapes, I wrote in my journal about the spirits in the stream, had chats with the chipmunks and found faces in the cliff walls. With my forehead pressed against the glass of the old school bus window, a twelve hour ride to a whitewater rafting put-in became a pilgrimage through the great desert, to where the streets had no name. 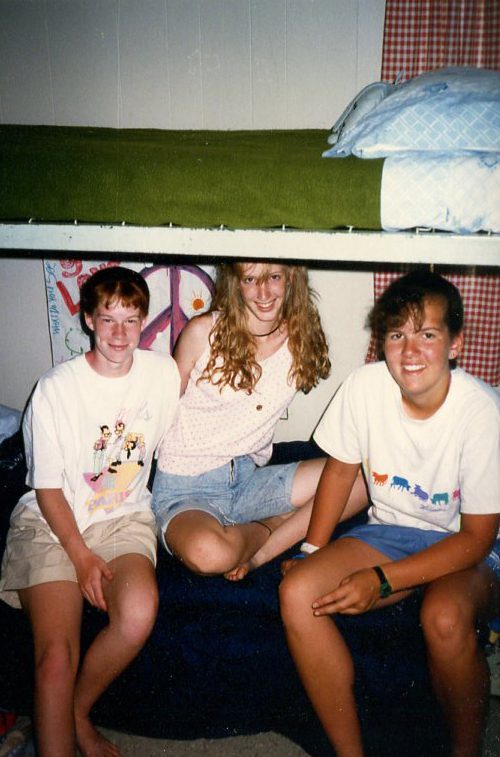 I guess that I looked like I was having an interesting time, because within a week, campmate contempt turned to curiosity, which turned to appreciation and by the end of the 4th week, it was dawning on me that something new was happening. I got secret notes from girls who wanted to tell me how much they liked me. I got “you’re my favorite” from counselors. I was voted “the most desirable” by the oldest boys’ cabin. I was possibly the most popular girl at camp. I was just living into who I was without all of the trying and without care for consequence. I was just suddenly brave enough to be me, to my own tune.

Summer camp ended and I brought the feelings with me, for a bit. At home, I was actually farther and farther from free, the more I expressed myself. My ideas were criticized, my wears were ridiculed and I felt completely rejected by my own family. In less than a year, my love of freedom called for war. I was grounded, often. I started running away. I was put somewhere to keep me “safe”, which was basically an expensive form of imprisonment that was partially covered by insurance. They had my head examined.

When war was present in Ireland, U2 started singing about and came to America. Where could *I* go?

In my continuing search for freedom, I lost touch with U2. Their proceeding albums had a song here and there that would grab my attention, but I just didn’t connect with them like I used to. As I came in and out of authenticity with myself, and was once again heavily influenced by my peers, I criticized them for being “sell outs”.

Even as many other albums became my favorites, I never gave up listening to those three U2 albums. Hearing them would still seize my emotional attention, but without tears. In the process of sorting through all of the emotions, which ones are and are not appropriate as an adult, crying-for-music didn’t seem to make the cut.

Before 2017, The Joshua Tree, 30 year reunion tour, I had never seen U2. I had a feeling that it would bring something back for me, but with a measure of skepticism. So many things from youth are better off kept safe from our adult critic and I worried that this show might ruin my beautiful and sacred memory of how they inspired me to stand for something, all of those years ago.

So my critic decided to review the show before I even experienced it.

I thought, “Maybe I was just full of hormones then and the remaining bits of emotion I feel are nothing more than sappy nostalgia. Maybe Bono, with his sunglasses all the time, no matter what the reason, was some kind of rock-star narcissist. They turned kinda pop-y, you know. And what’s with all of this American patriotism? It’s no time for that! Maybe if they play something from Unforgettable Fire, I could cry. Maybe.” 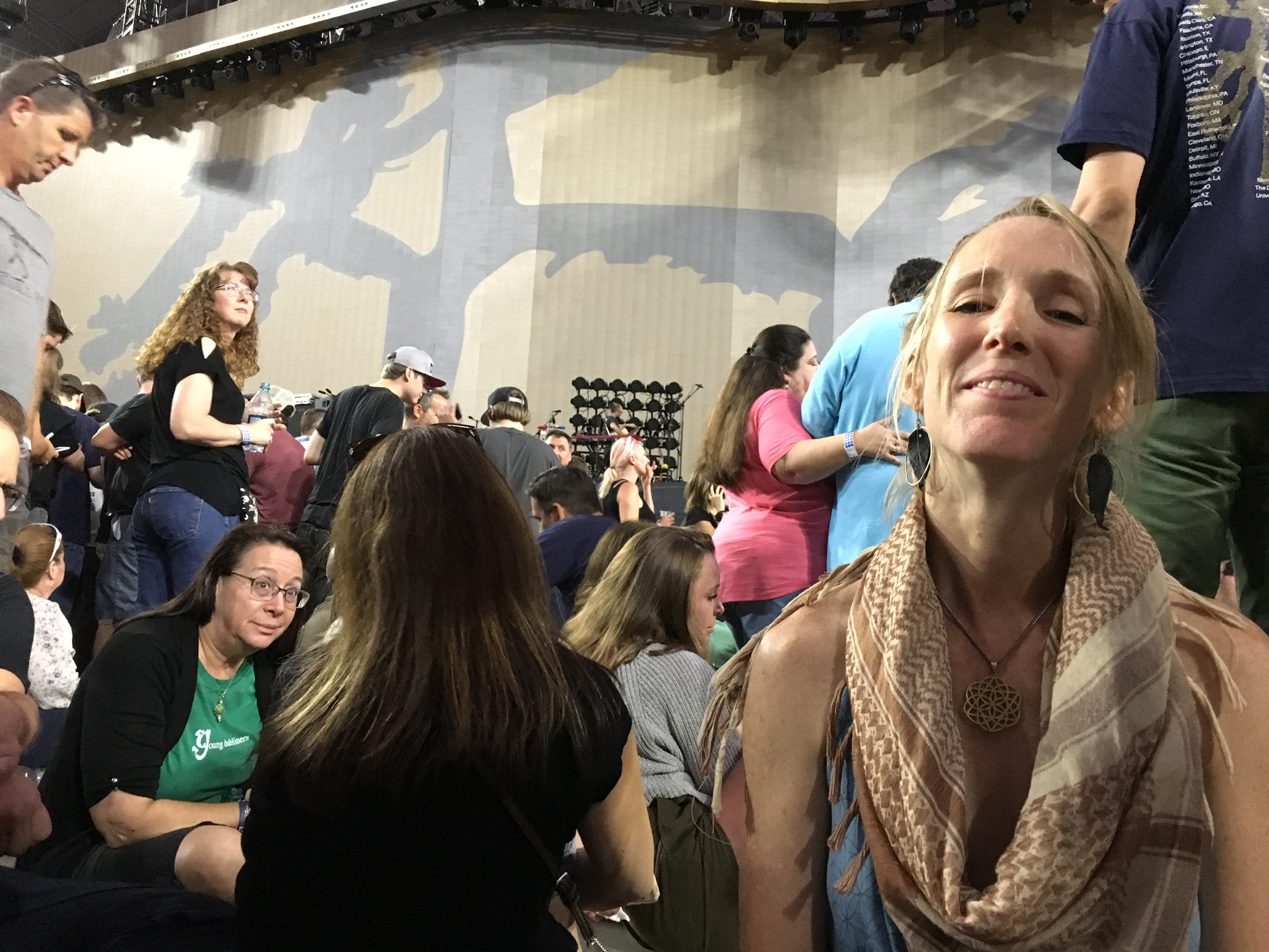 On September 19th, 2017, we showed up at the University of Phoenix Stadium early to get a spot, up close. I had dressed in something that I later realized my 15 year old hippie-self would have been quite proud of and it stood out, in a very casual and mainstream looking crowd of people. As we held our spot, close to the stage, I looked around at the vast interior space and as far as I could see, there were faces that held the same anticipation that I felt. Clearly, this band had made a big impact on everyone in some unique way.

Primed by quotes and prose on a huge screen, displaying the main messages of hope and freedom, specifically in America, the room turned red. U2 didn’t launch right into the featured album of the night. First, they played four songs, all from those previous two albums that I spoke of earlier. Just before they played their third song, Bono spoke to us for the first time. He told us that we were going to create a rock and roll show together, with emphasis on “together”.

‘Cause tonight, we can be as one
Tonight, tonight

They were on a mission to unify a divided US. He said, “We will find common ground, reaching for higher ground. … We have to stay awake to dream … even in God’s country.” And then they played “Bad”.

And I bawled and didn’t really stop until the show ended.

My coverage of that night’s show isn’t what this is about, but I will say this: every sound was perfect, just as beautiful as I remembered and now, so real. I watched and listened in awe of their confidence, calm stature and zen-like delivery. It was clear that they unshakenly stood for what they believed in and never gave up hope for. Magically, they transcended any current controversies about those ideals, at least for the night. They opened our hearts and made the forever hope of freedom, unity, and compassion a shared experience for all of us.

They’ve re-inspired me to live my truth, especially in the face of opposition, and stay the path to higher ground. I could see it in the faces of this audience that their magic worked on more than just myself.

One love, one blood
One life, you got to do what you should
One life with each other
Sisters, brothers

For a far less personal, but very accurate and thoughtful writeup in Phoenix New Times about the very show that we experienced, see: U2 Brought The Joshua Tree Back to the Desert