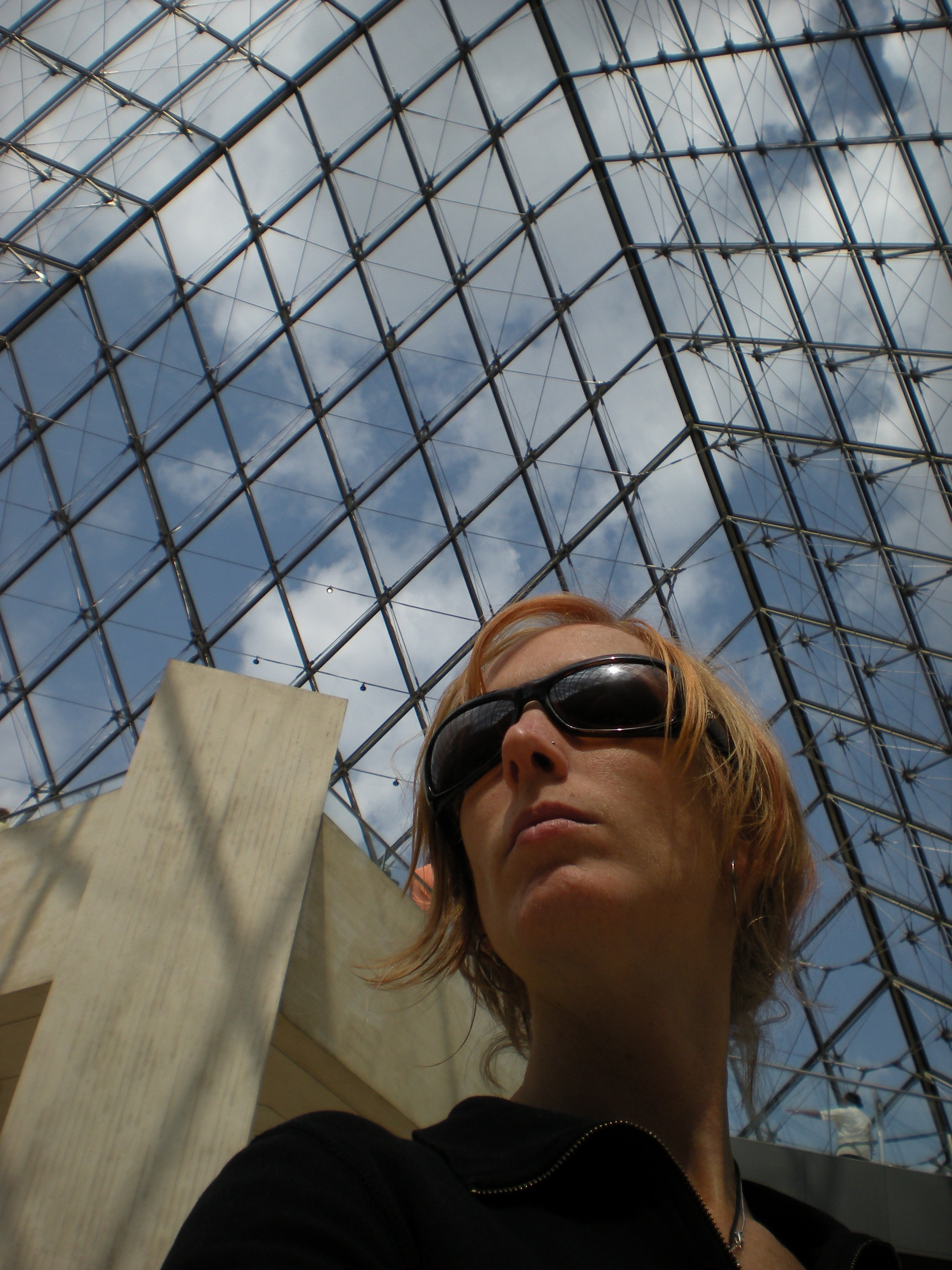 I left Paris yesterday morning and haven’t blogged for two days. It’s almost impossible to keep up with this, in the limited time I have to sit and type. It feels worth it though. Writing this blog and making art is like cupping my hands to catch the rain. You can’t really hold the experience, but you can enjoy it for a little longer and a little bit more deeply.

I finally went to the Louvre! I woke up early after my crazy Pont dez Arts night, and managed to spend 3 hours there. I was alone in public… so freeing, somehow. It’s just me and my thoughts. No one to share them with, no one to behave around, no one to keep me from blowing with the wind of my own curiosity, which is totally unpredictable. But also, no one to help me to navigate. I’m not the best navigator, or maybe I just don’t like to do it(?).

Which way to the Mona Lisa?

I only had so much time at the Louvre and I follow Gerard’s advise when he said “Maybe you only see Italian paintings”. It took me an hour to find them. Maybe that’s because I found the restaurants first, and the coffee. Still I wasn’t quite prepared for what I was about to see. I took a deep breath and waited for my first impression to hit me. I’d see these shapes and colors before, between cat naps on the desk in art school. I was more awake for modern art, by then I’d decided to take my education more seriously. It’s a shame how much was wasted on it when it was too soon. I was more interested in drinking beer and playing pool at that time. By the time Modern Art came around I had learned to do both: education and bar going. 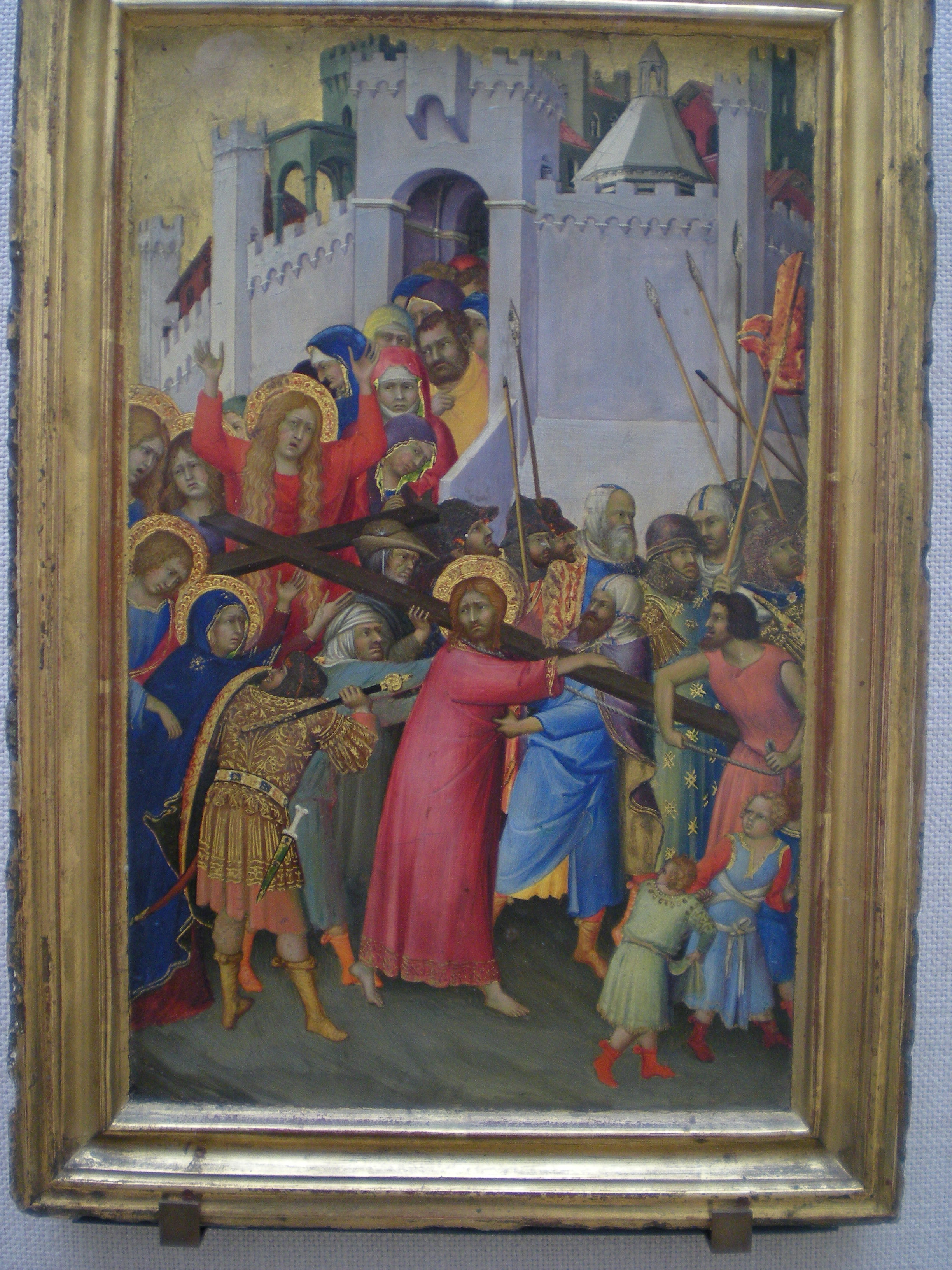 First impression: These paintings are so old! They are the first °real° paintings (sorry cave people). The painters of the 15th Century don’t seem to have a grasp close and far away as it relates to the size of peoples’ heads. I wonder if it bothered the artist. “Damn, I made that guy’s head too small!” or was it more like “something is not quite right, I’m not sure what it is”… and then his wife says, “but Simone, you are too hard on yourself. It’s beautiful!” 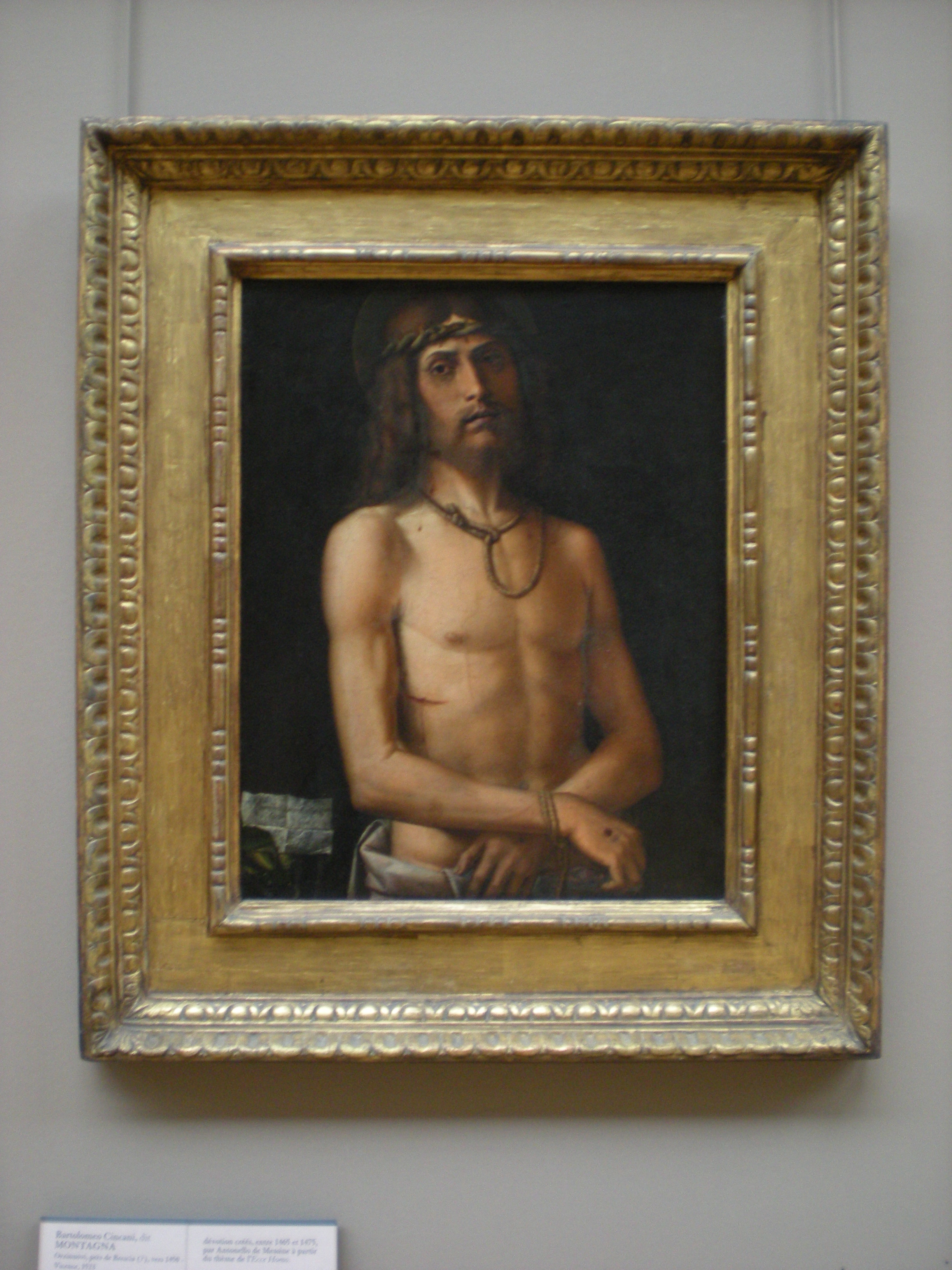 He would have no idea that 150 years later Boticelli would have it sussed. These old paintings remind me of student’s work, in that they are all effort and disproportion, but with more sophistication and arrogance in them, because they are the very best of their time. 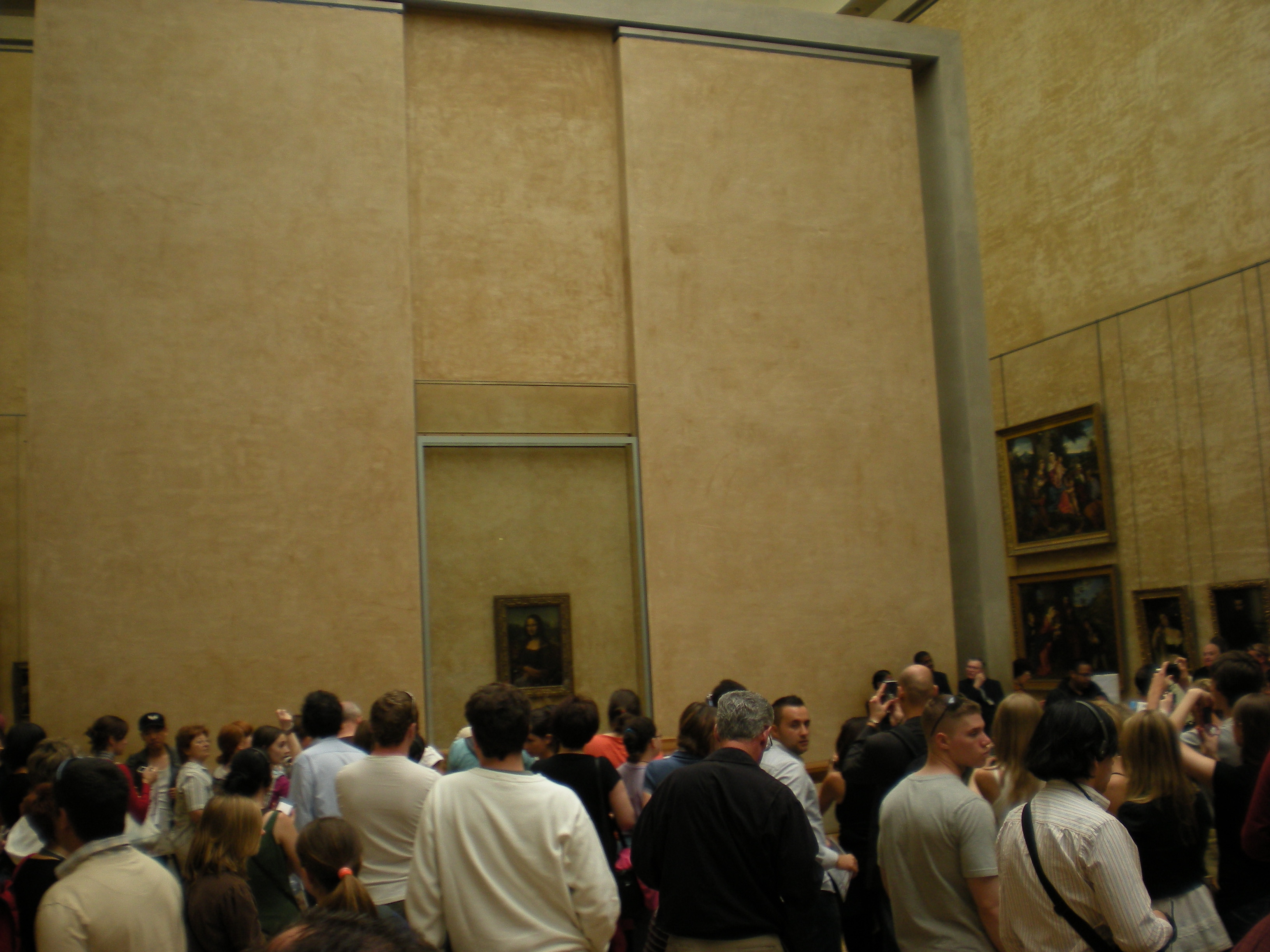 I feel like I can tell the difference between a painting done from a photo, from life, or from memory. Photo references were not an option of the time, so I think that this one of Jesus, was from life. It makes me wonder who got to pose as Jesus “You be Jesus”. Did they go as far as to put a crown of thorns on his head? Something tells me they didn’t. That would be sacrilege.

Oh, the Mona Lisa! I only got so close because of the crowd, but between you and me, she looked at me. I couldn’t help but wonder what she was thinking. As so many others have. I get it. I get the hype. It’s worth it. As much as people warned me not to be surprise about how small she is, I was.

I wander into a room behind the Mona Lisa and suddenly, it’s like, “who crashed the party?”. French Paintings. I decided to come back for this later… and I do and they are great.

<–This is my next Burning Man costume.

Before I leave I find myself viewing the Art of Africa, Asia/Oceania and the Americas. Wow. People from Micronesia seem to have had a serious sense of humor. 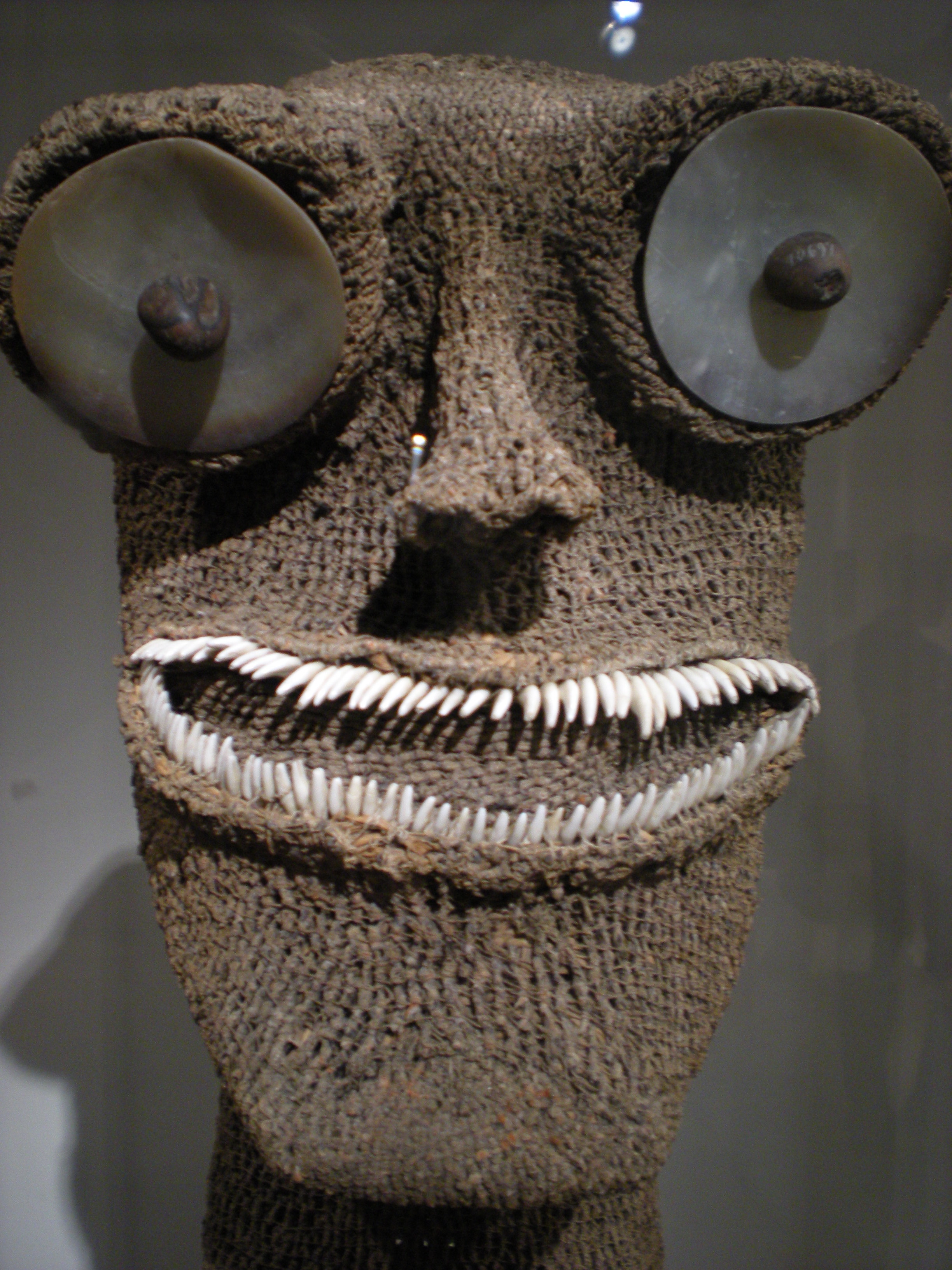 I didn’t have much time for the stone sculptures on my way out, but I had to capture this one where it looked like the guy was taking a photo of himself. 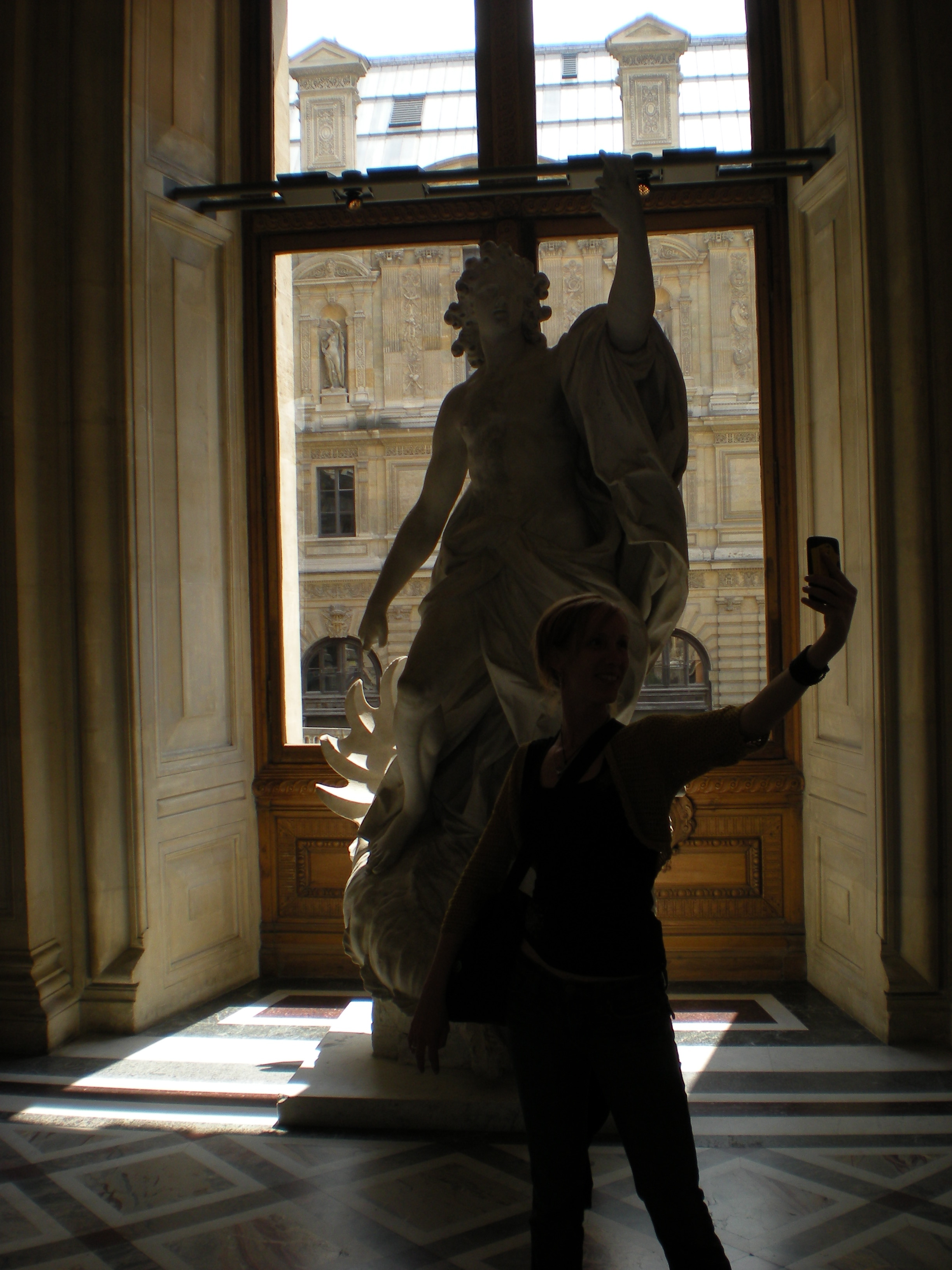 I learned later that it would take 4 months of non-stop art viewing to see everything in the Louvre if you only spent 2 seconds viewing each masterpiece to see it all. I think that I might have to come back someday. 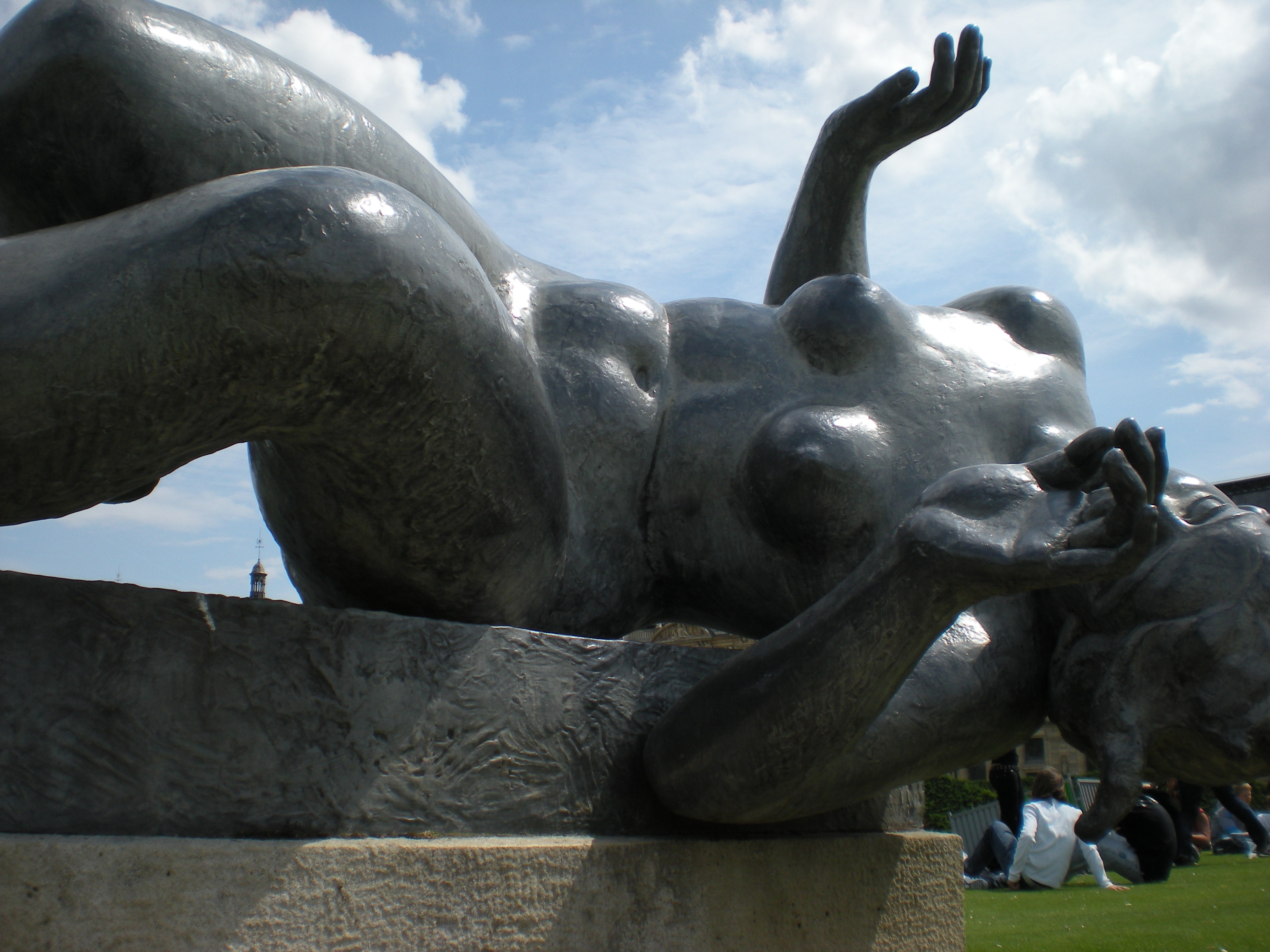 After the Louvre, I met up with Cynthia and Joao. We went for a stroll in the 6th (Luxenbourg neighborhood) where there are many galleries… but my feet hurt and I was completely saturated with art and just needed a break. We went for gelatto, my first in Europe and I was uplifted by it’s beauty, flavor, richness and sugar! Ahhh. C and J wanted to buy some art at the gallery down the street, so I waited at a nearby cafe with an espresso, but it only takes so long to have an 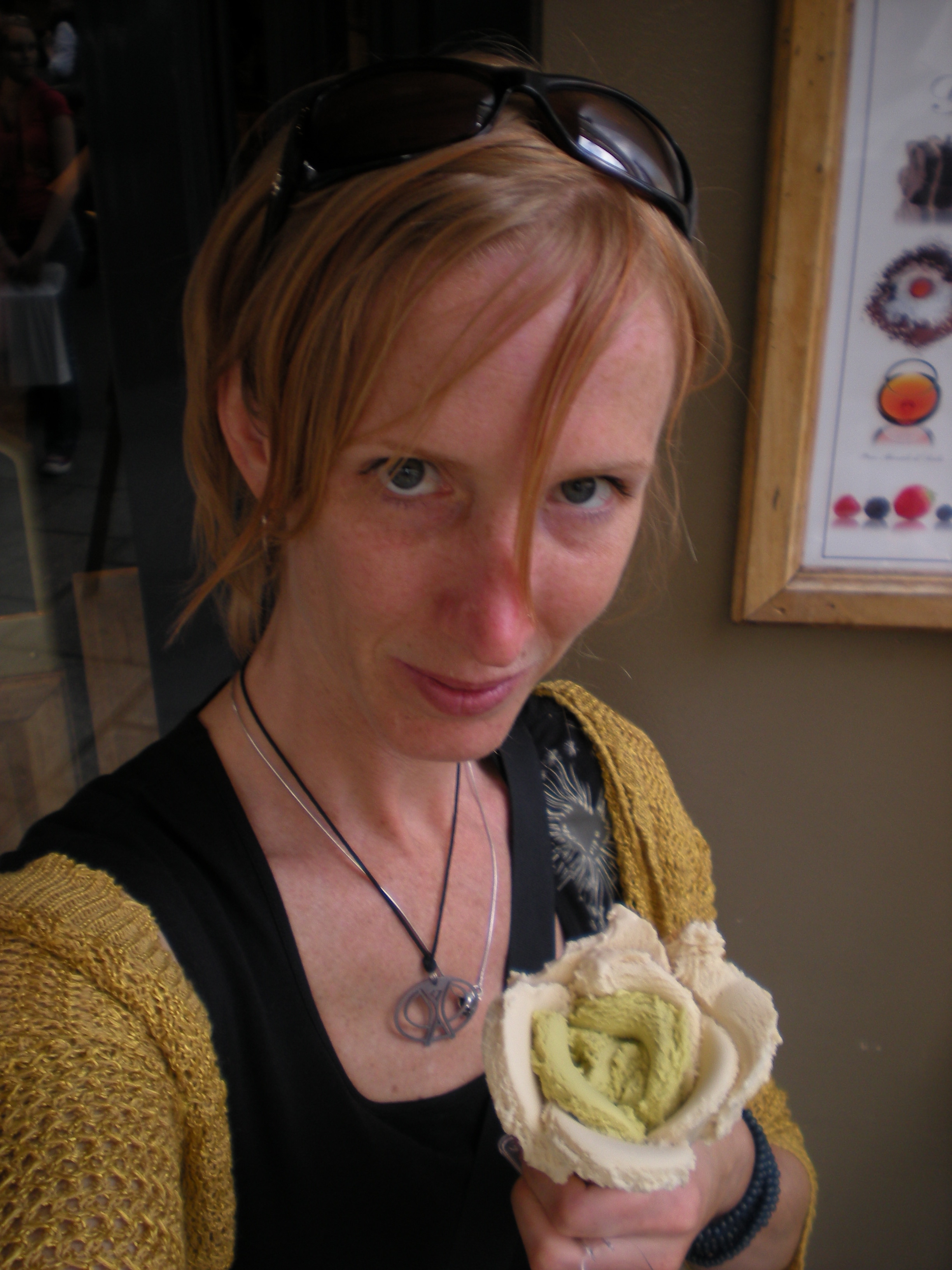 espresso, so I left the table to someone else and waited in the street… for an hour! Finally I start asking around to figure out which way my friends headed. When I found them, they were having a very difficult time.

It was probably the most beautiful day in Paris on my whole trip and my good spirit but my feet were failing me. Once C and J decided to cut their losses and leave the den of the most negative and crazy human being in all of Paris (this old gallery owner that they were simply trying to buy art from), Joao took over to ensure that we (C and I) didn’t have dual melt downs. His plan included wine and relaxing at the Luxenbourg gardens. We walked 10 minutes, fast, and when we arrived the gardens were closed for something, I don’t know what! I collapsed on a wall and posed as a drunken chick for a 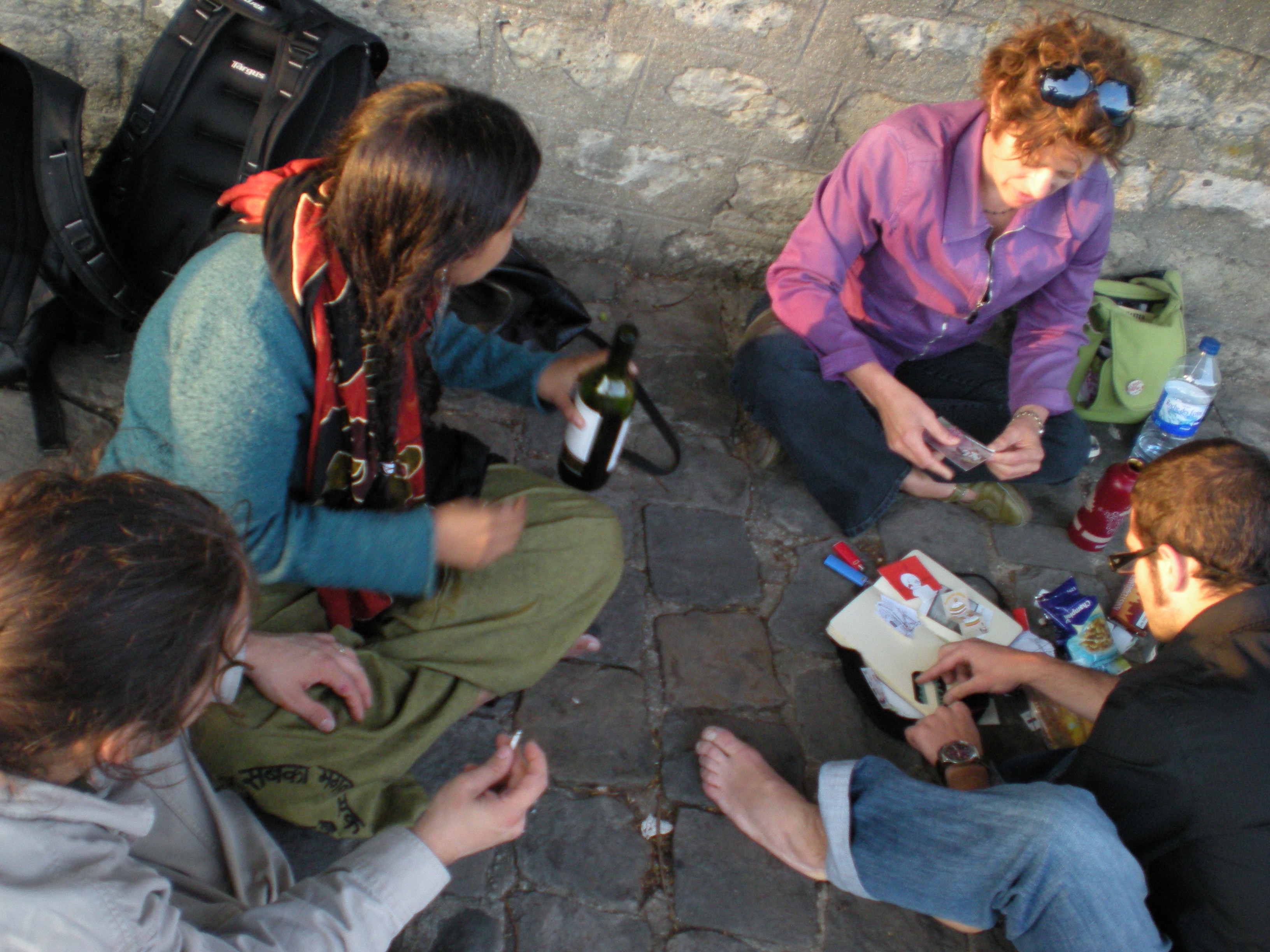 few moments while I gathered my wits. We tried to rent bikes from these automatic bike rental things that are all over the town, but our cards were rejected. About 20 minutes later we were at Pont Neuf on the “Island of Paris” below, enjoying art, drinking wine, smoking a splif and meeting the locals. Heaven! Saved. 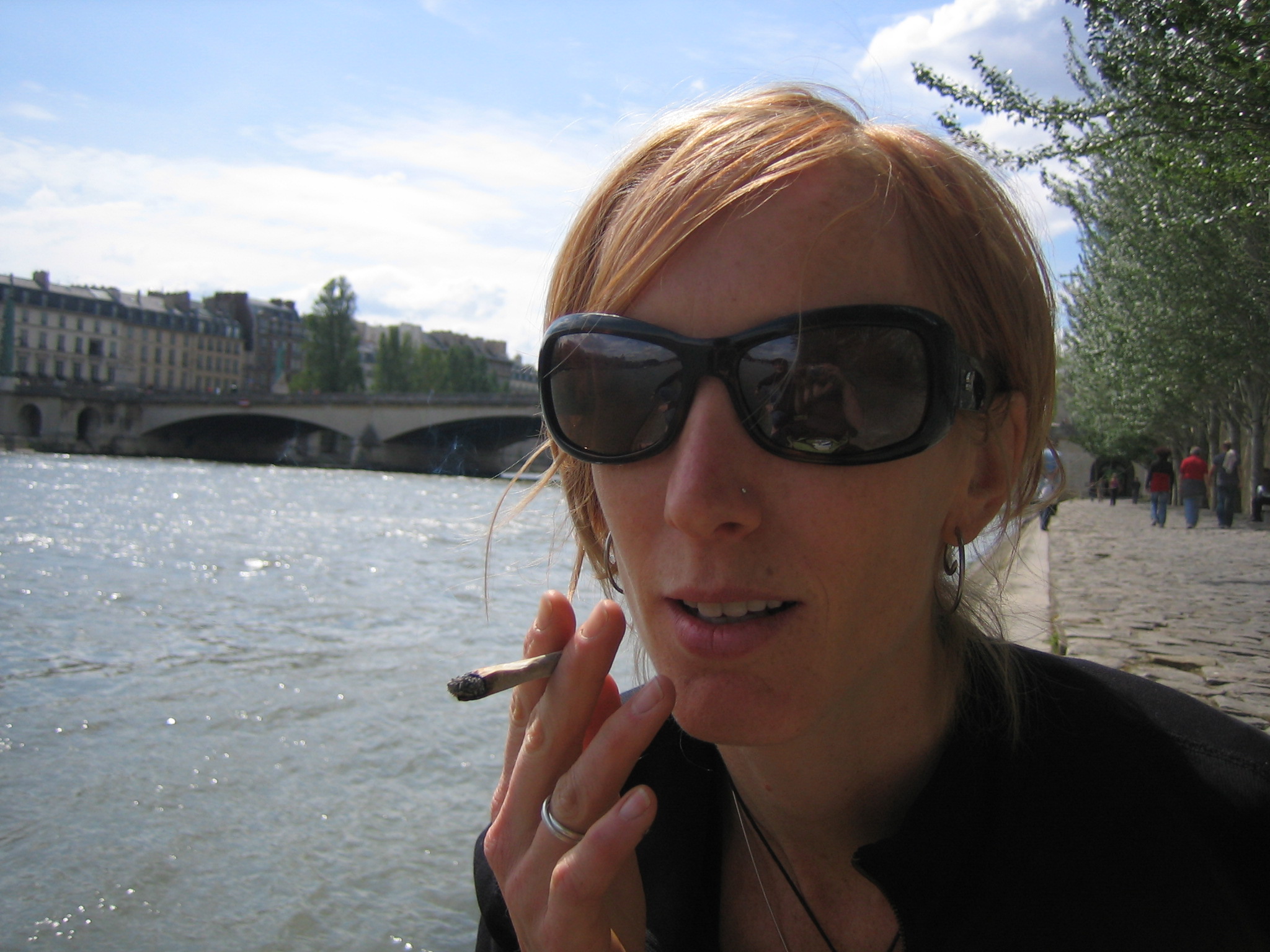 I drank a lot of wine in Paris. Europe makes it seem less than a miracle that Jesus turned water to wine, because it’s only 2 Euros more! 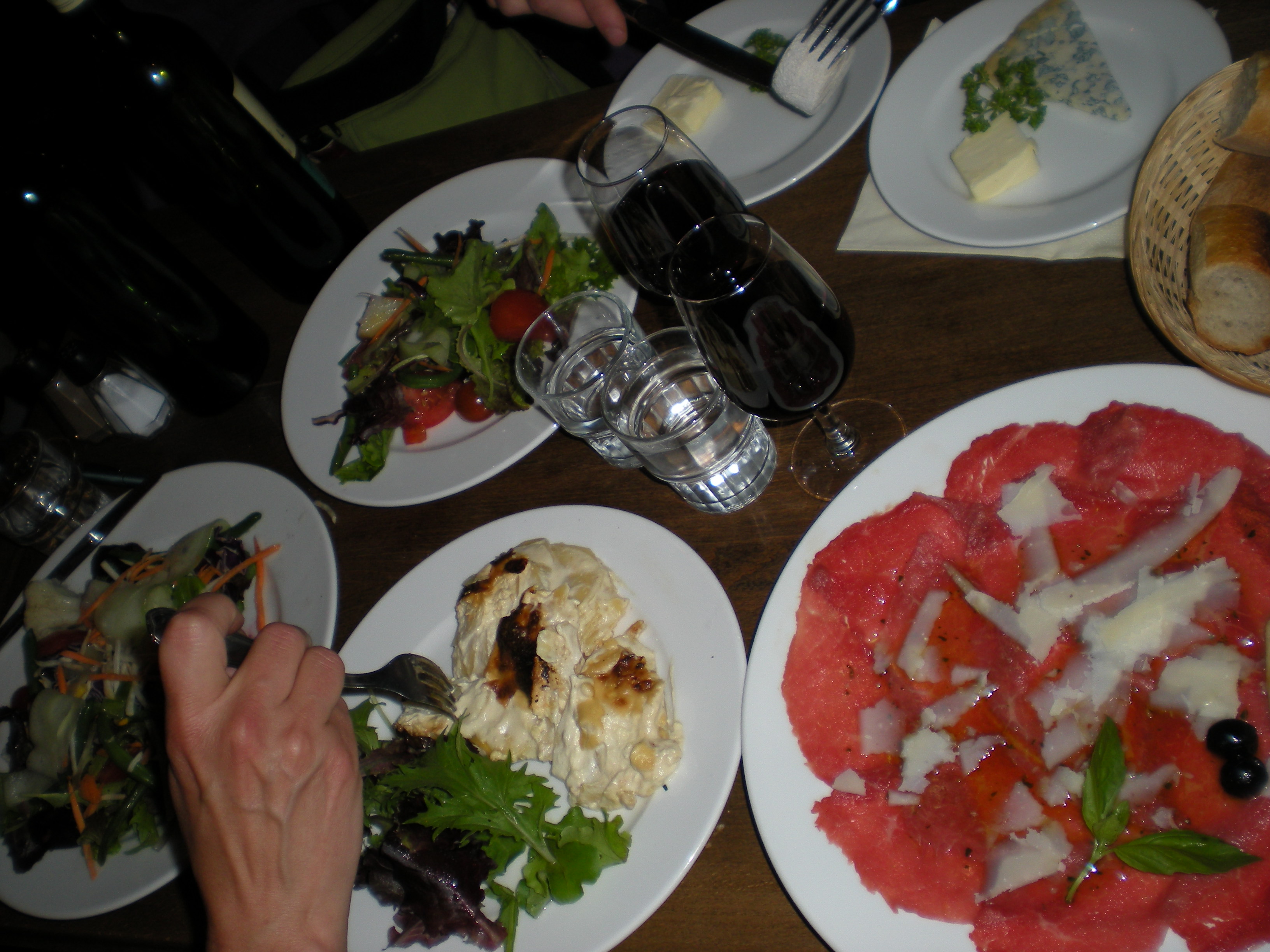 That night we enjoyed our one full-on Paris dinner experience. We arrived in a Taxi, my feet were thankful and spent 2 hours eating and drinking. I had Carspaccio with Gratin and Salad… and we shared one bottle of the cheapest red wine on your list. Cynthia and Joao’s meals were less good. Of course, we had coffee afterward.  It’s tough to keep track of the time when the sun is still up at 10pm! This was the night I posted my last two blogs. I got to sleep at 6:30 am.

To be continued….. Final day in Paris at the Centre Pompidou. It’s time for Apertivo and more wine now!