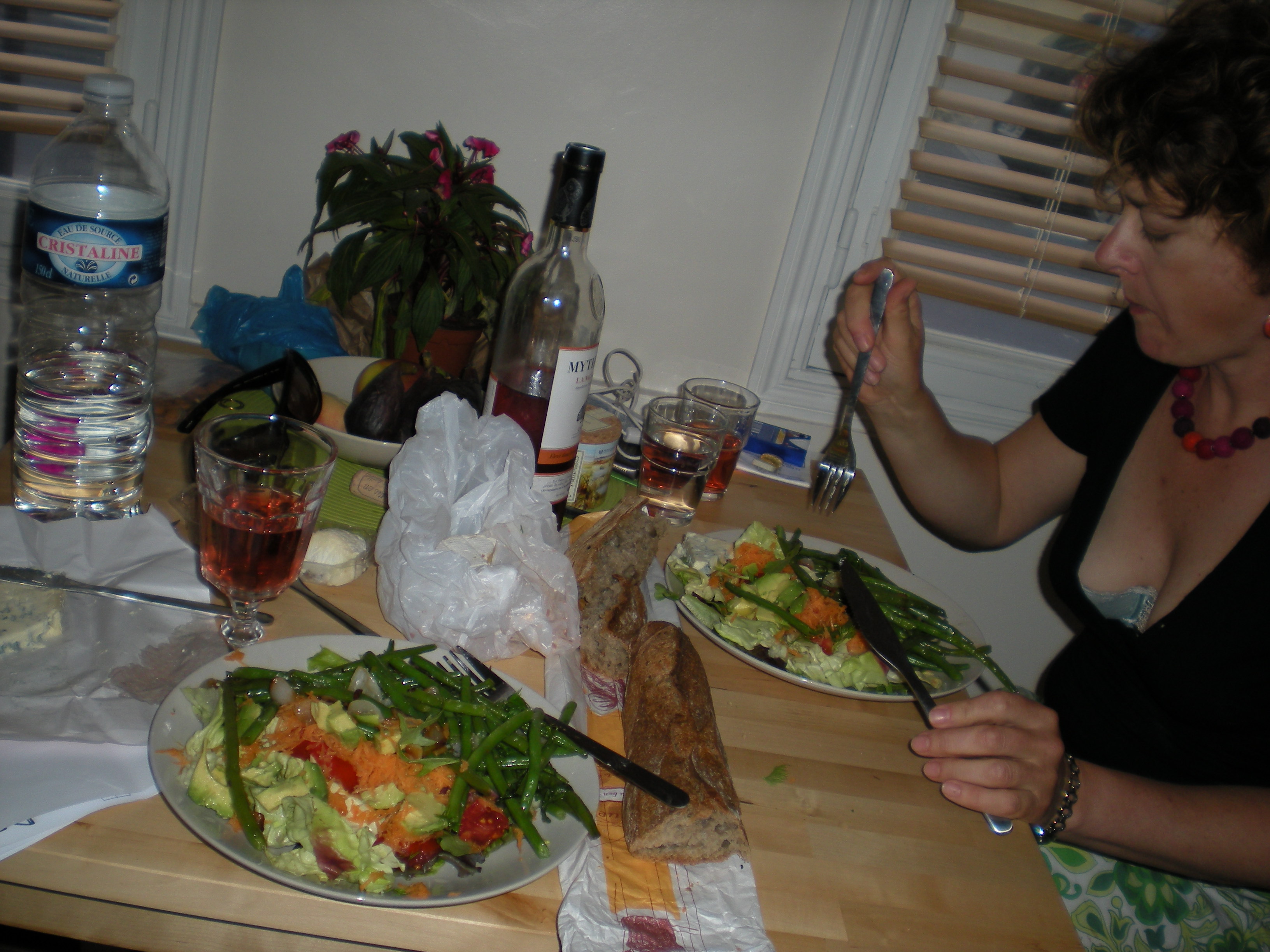 After spending waaaaay too much time at the internet cafe yesterday, I went out and had some real life experiences to come back and share. Blogging is fun. I feel like I have this new purpose as a rouge reporter without an editor and with my own private distribution list. It really deepens my experience. I want you to enjoy.

Check out how serendipitous life can be… Cynthia’s new love monkey, Joao (pronounced Jo-Wow) was to arrive today (Friday) and we were supposed to get together with her friend who lives here, named Heather, for some kind of social time. Cynthia hasn’t seen Joao for 2 weeks. They are new lovers. Making plans with your girlfriends for the night your hot, new Portugese lover arrives to be with you? Is she HIGH? I had to make an executive decision. “I’m going out without you on Friday. I’m leaving you two alone that night” I said. That’s tonight, which is like now, so I can’t talk long, I’ve got things to do and people to see!

Cynthia called Heather to see if she could get together Thursday night instead. Heather is an American who lives here and has just completed her book, Naughty Paris. Heather had plans already but asked if we’d like to join her. She’s friends with a guy that rents out night clubs in the early evening, for an event called “after job”. The clubs are in Paris’ big fashion district (if you want to know the name, look it up, cause that’s what I’d have to do… French goes in one ear and out the other for me. It’s difficult. So we get all dolled up and hit the streets to go shake it up with some French Yuppies at 3 clubs, getting comped entry and free champagne at each one. I was kind of excited for my first Paris club experience, but then immediately after arriving, very disappointed. These are the early-evening, young, ametures —mind you— but still the music should be OK.

Not so. It was old and everyone would sing along and wave their arms around… I’m really not going to knock it too much, cause you know, they were having fun… and that’s what counts, right? I’ve noticed bad music here before this one experience, but this one sealed  it for me. When asked later, Cynthia concurred. But, I don’t get it. Why? 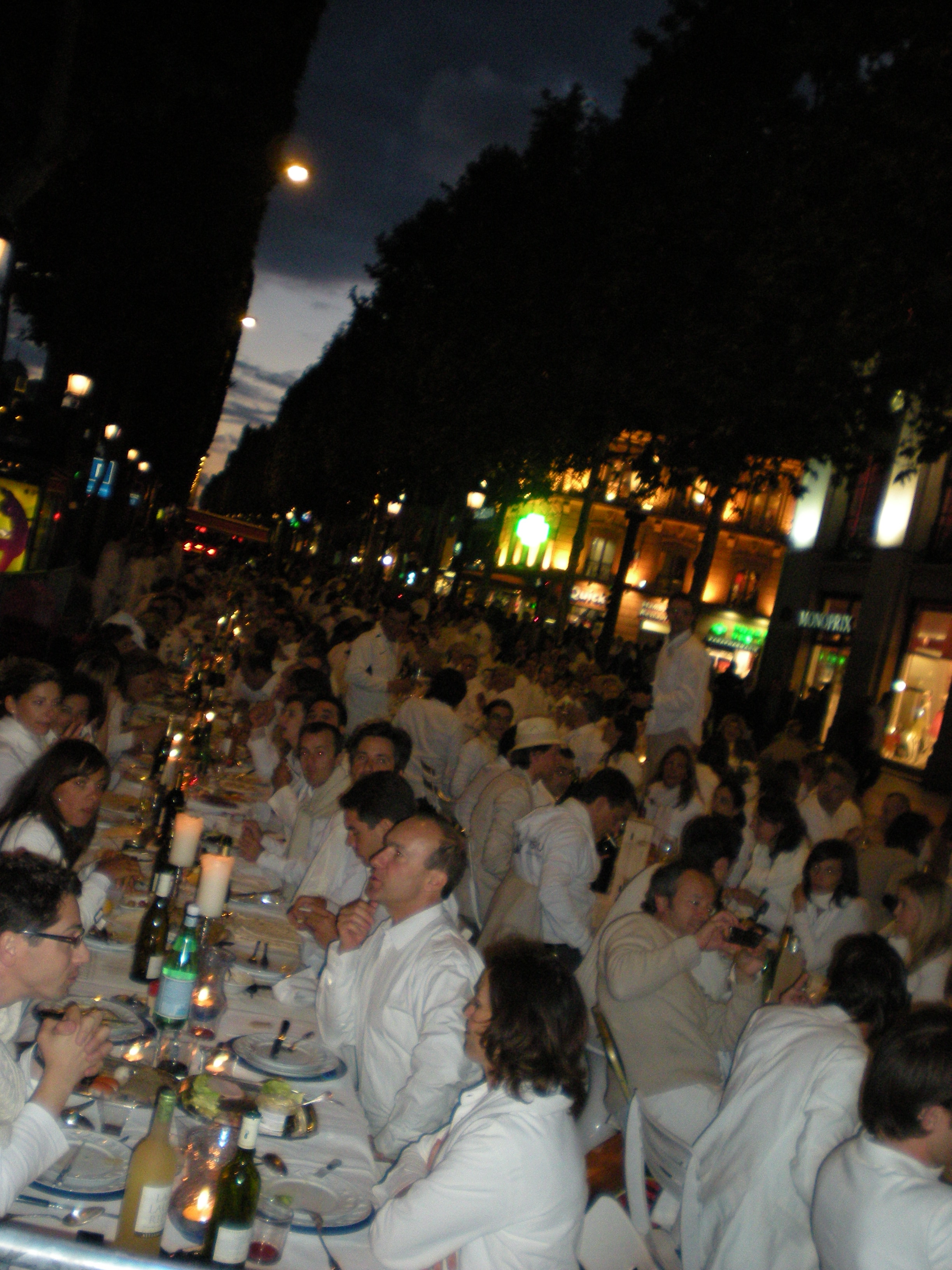 White Dining in the Streets

As we’re watching the 20somethings in their work clothes get up get up and get down on the dance floor, Heather’s phone. It’s the owner  of the club calling, to tell us that it’s happening on the street. We push our way up to the steamy windows behind the DJ booth and make a little see through spot to look down onto the street. It’s hard to tell, but there seems to be a ton of people dressed in white gathering below. We decide to head down for a closer look. Behold the “white picnic”
I feel so lucky to have witnessed this once a year event. There were an estimated 2,000 people all dressed in white from elegant formal wear, to polar bear costumes, to white Marie Antoinette wigs, to chef’s clothing all dining on the street. People bring their own food, drinks, tables and chairs and line this major street with a banquet of turkey, sushi, spaghetti, you name it. Everyone was having the time of their lives! Every time a tour bus would drive by they would stand up and wave their napkins in the air, yelling and laughing. There was a live band in a big 18 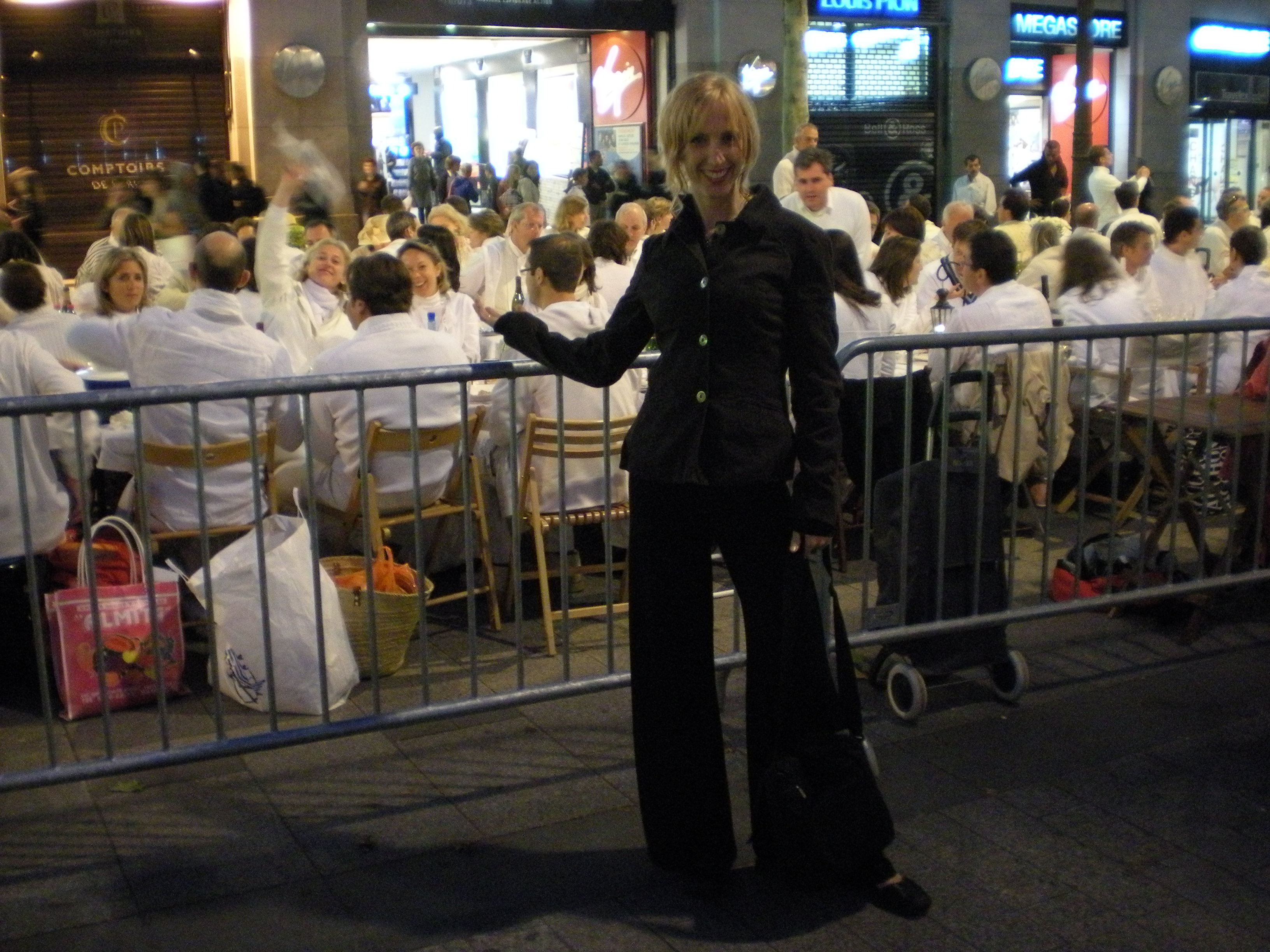 wheeler with an open side, driving by slowly and stopping at each section of diners for a couple of tunes and then moving along. “Sweet Home Alabama”. “It’s Raining Men”. “Etc”. 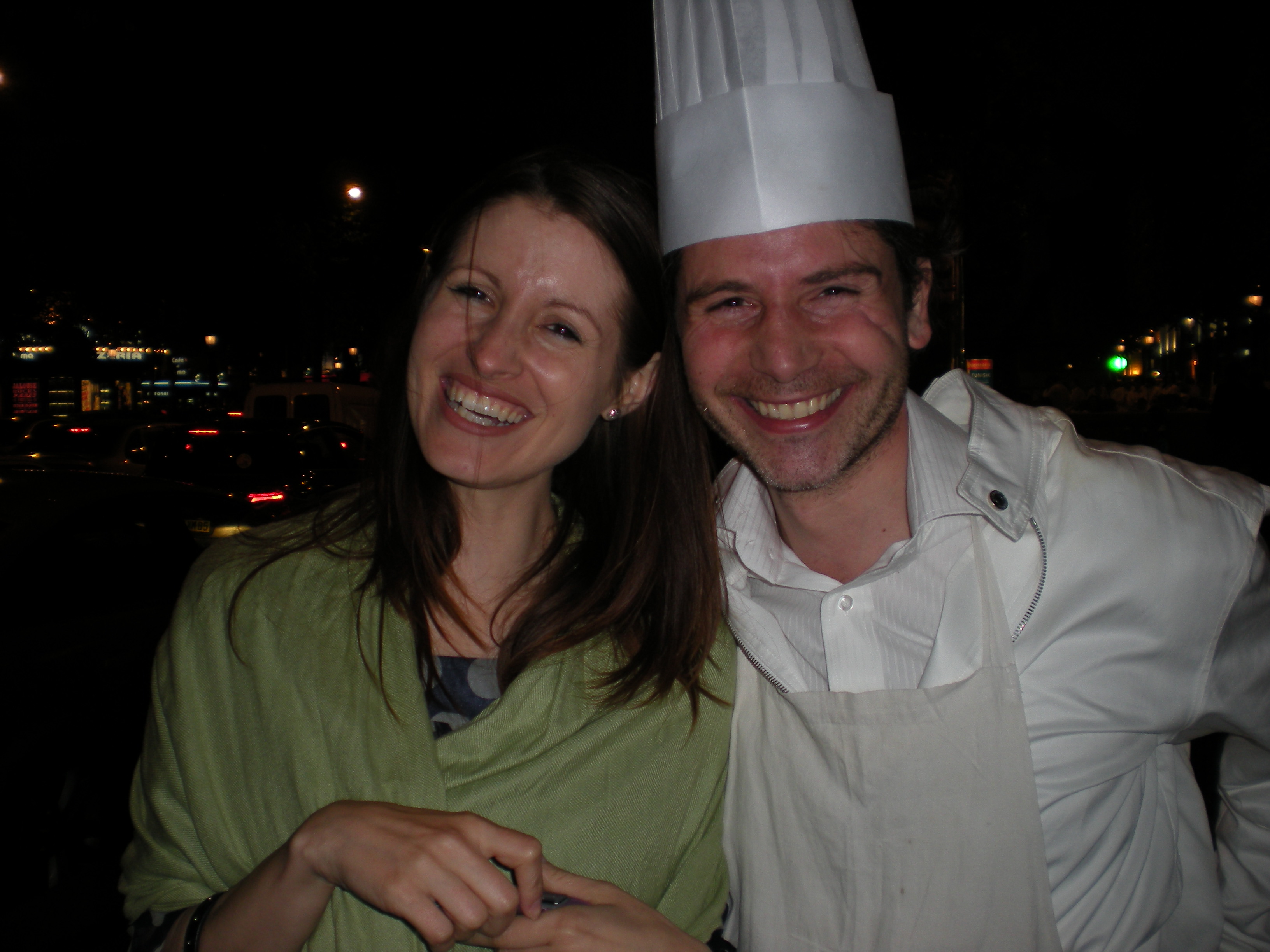 As the three of us wander around snapping photos we’re pointing out different costumes and characters to one another. Heather noticed this cutie in a chef’s uniform and before we knew it, he was hanging out with us and flirting. He had a British accent and was absolutely adorable. I seem to have been witness to history in the making… I mean look at them! See what I mean about getting close? I’m so close that I can touch it, smell it, feel it a little… no, pitty, I can’t taste it. 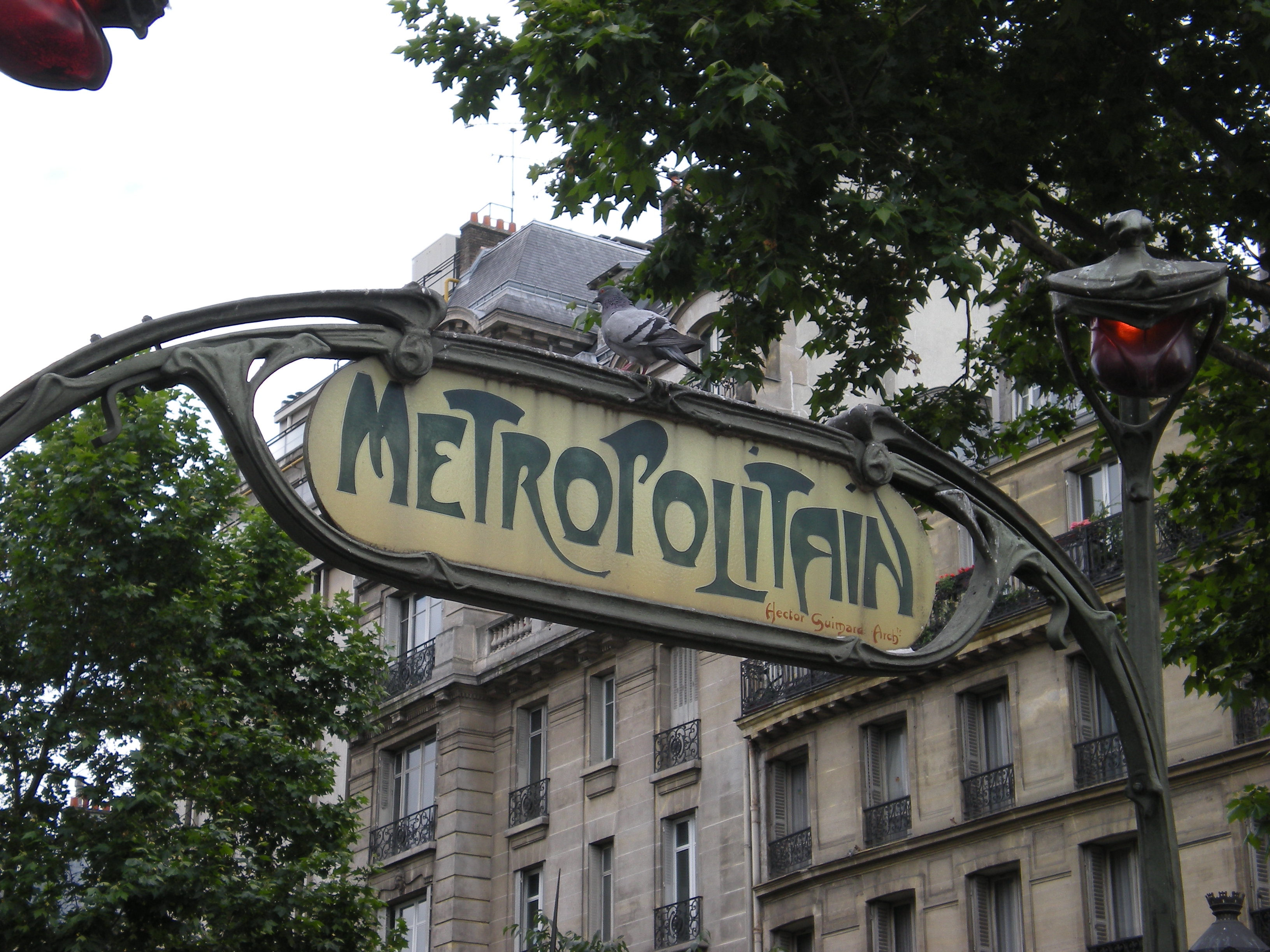 Cynthia headed to the Shakespeare festival/conference today and left me to enjoy the Louvre on my own. At the crack of dawn, she got ready to go. I pressed a pillow firmly over my head, trying my best to sleep in. When I peeled it off, it was 10am. Shit! I only had until 2pm before I had to meet back up with C on the Pont des Art. I didn’t think that I really had enough time to give the Louvre the attention it deserved… so I changed my plans. I threw on some clothes and hobbled out onto the streets. My blisters hurt the most in the morning before the pain has its numbing effect. I didn’t want to wander too far, ’cause I thought I might get lost… it’s scary, OK? nor did I have a clue about where I’d want to go. Plus, a stupid mishap the night before on the Metro that consumed 4 tickets in one pass, had me avoiding this mode of transport. Cynthia said that it was OK, ’cause everyone has a little freak out at some point on trips like this. I love Cynthia. 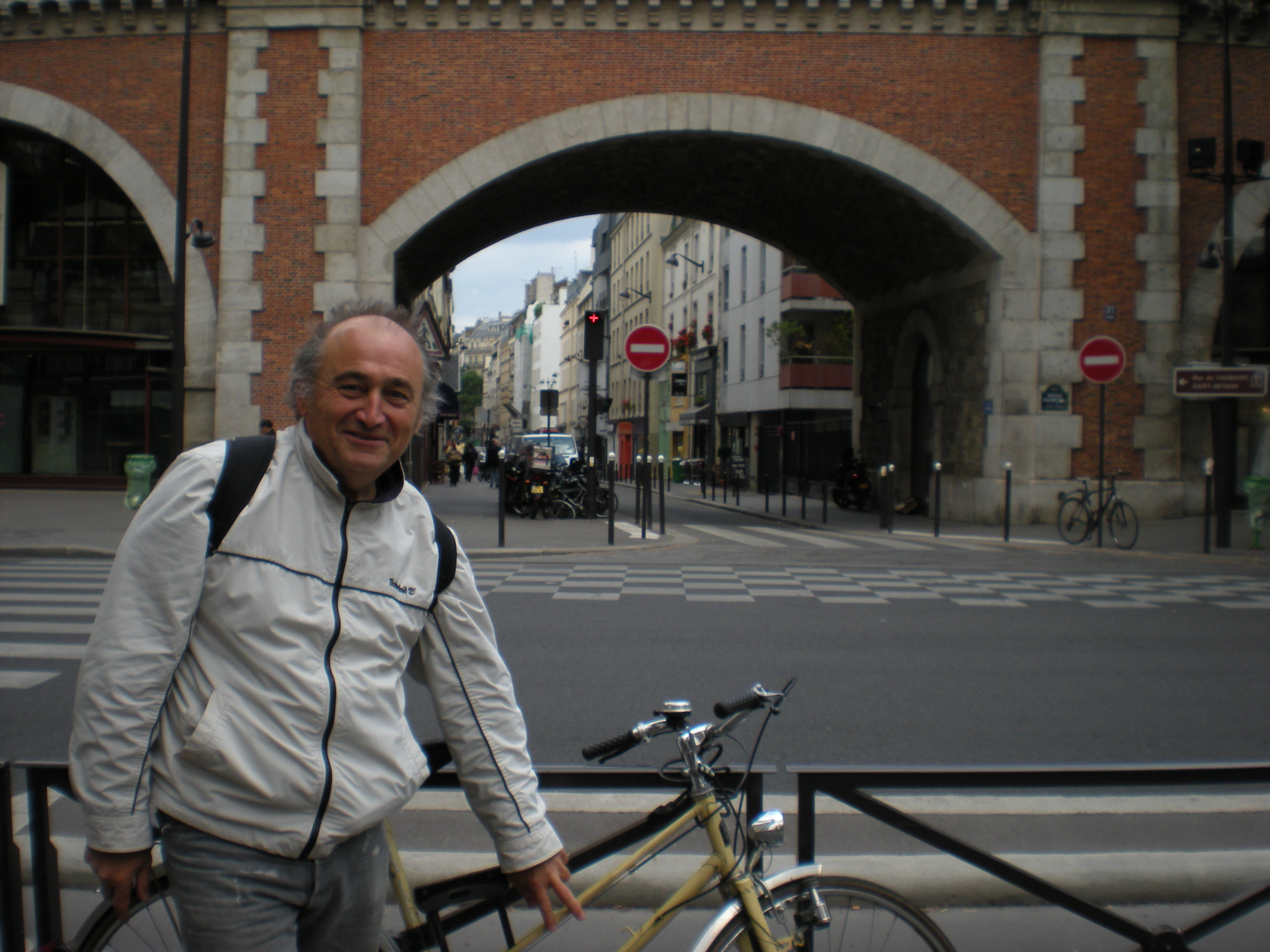 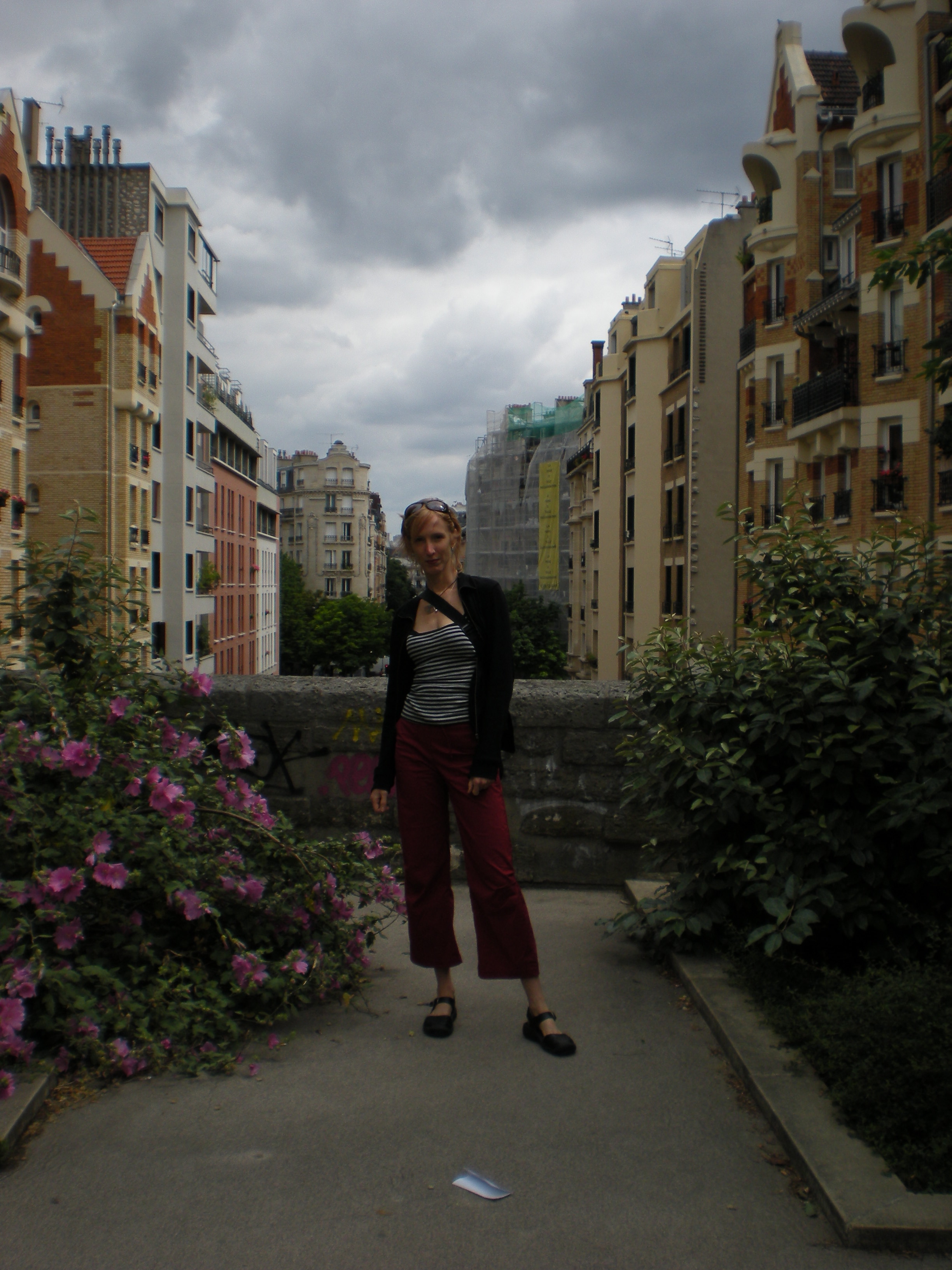 I got out my map and started walking, tracing my way with a pen as I went. That way, if all else failed, I could crawl back to the appartment. It was kind of ridiculous to be looking down at the map the whole time in this silly charade, but it actually served me well. Looking like a lost tourist, enticed one of those loney old Parisian men that preys on female foreigners. I know, you’re thinking “OH NO”… but really Gerard saved the day. 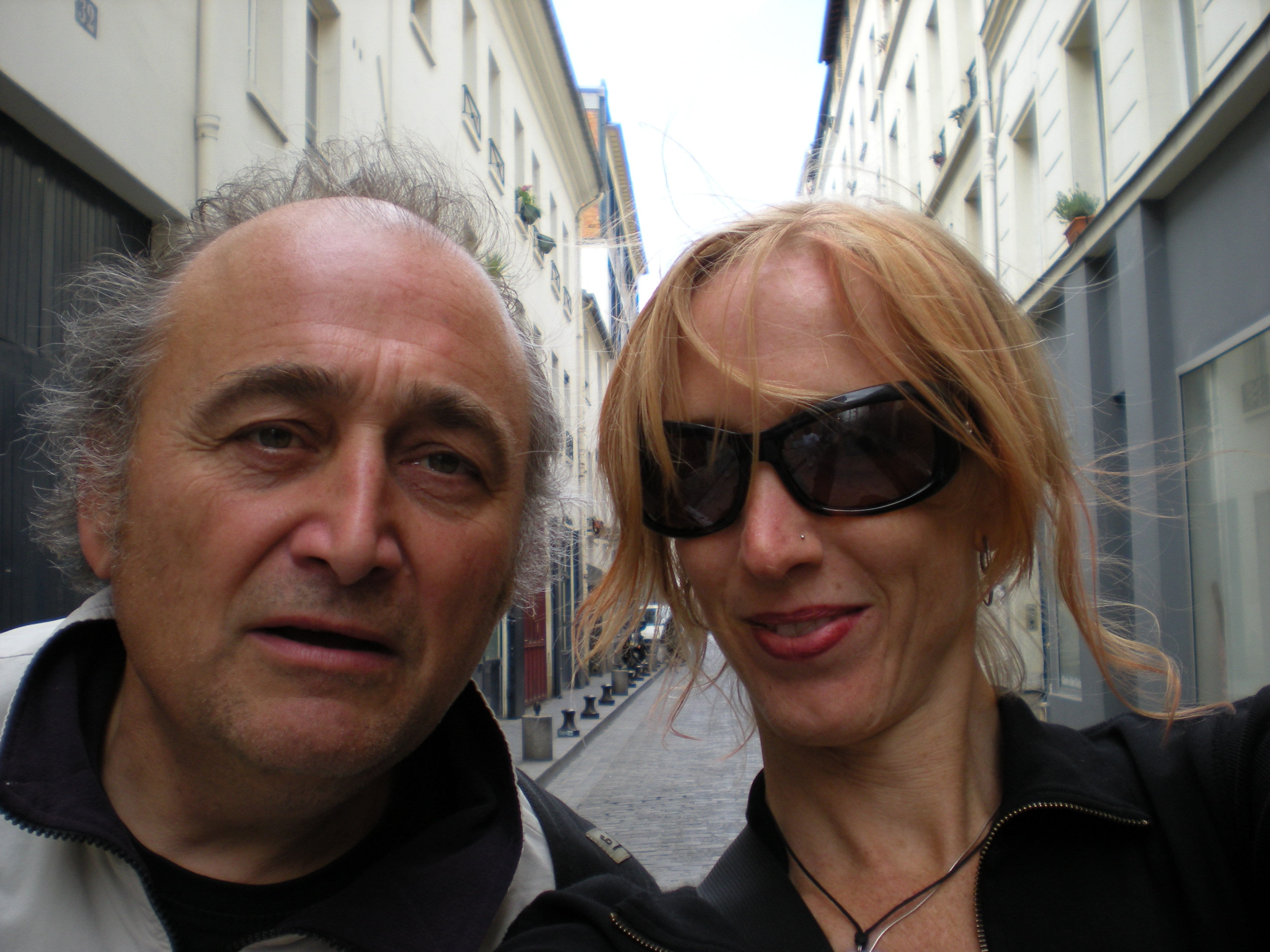 It was splendid having a local to hang out with and not have to worry about the map anymore. He showed me all kinds of beautiful places that Cynthia and I hadn’t made it to yet, as well as other spots that I might have never seen as long as I live. Gerard’s (jerraar’s) English was very good. He was patient and helpful as I struggled to speak my few French words, he shared stories and asked questions for mine, he pointed out famous places and shared the history, he bought me un cafe. He was a sweetheart. We hoofed it the whole time. Of course, he held my hand a bit and wanted to see me again, but I explained that I was a free spirit and would not have time until he comes to visit Colorado.

I deflected a hungry kiss just once. Once is OK. You can’t knock a guy for trying. We were the perfect match for a few hours of good company.

He said goodbye at the Pont de Neuf, as he couldn’t bare for our goodbye to linger any longer. I smiled all of the way to the next bridge. 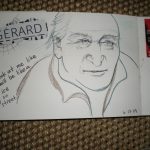 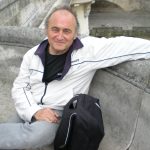 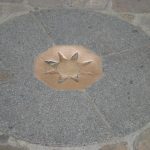 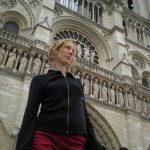 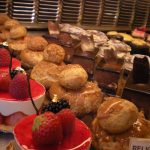 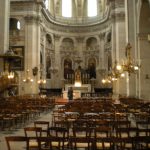 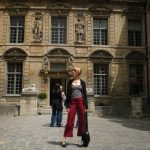 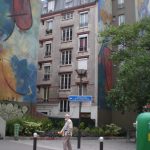 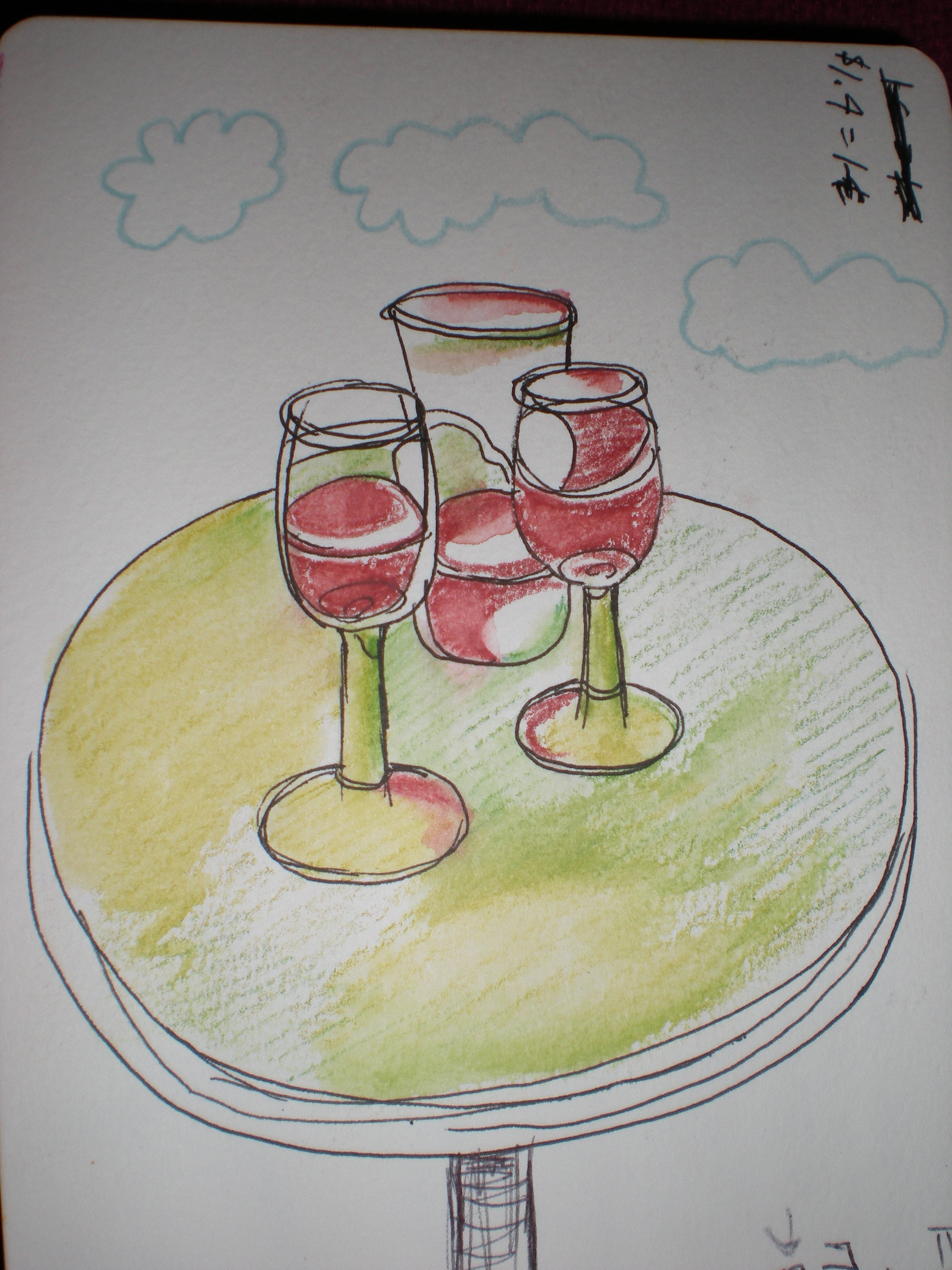 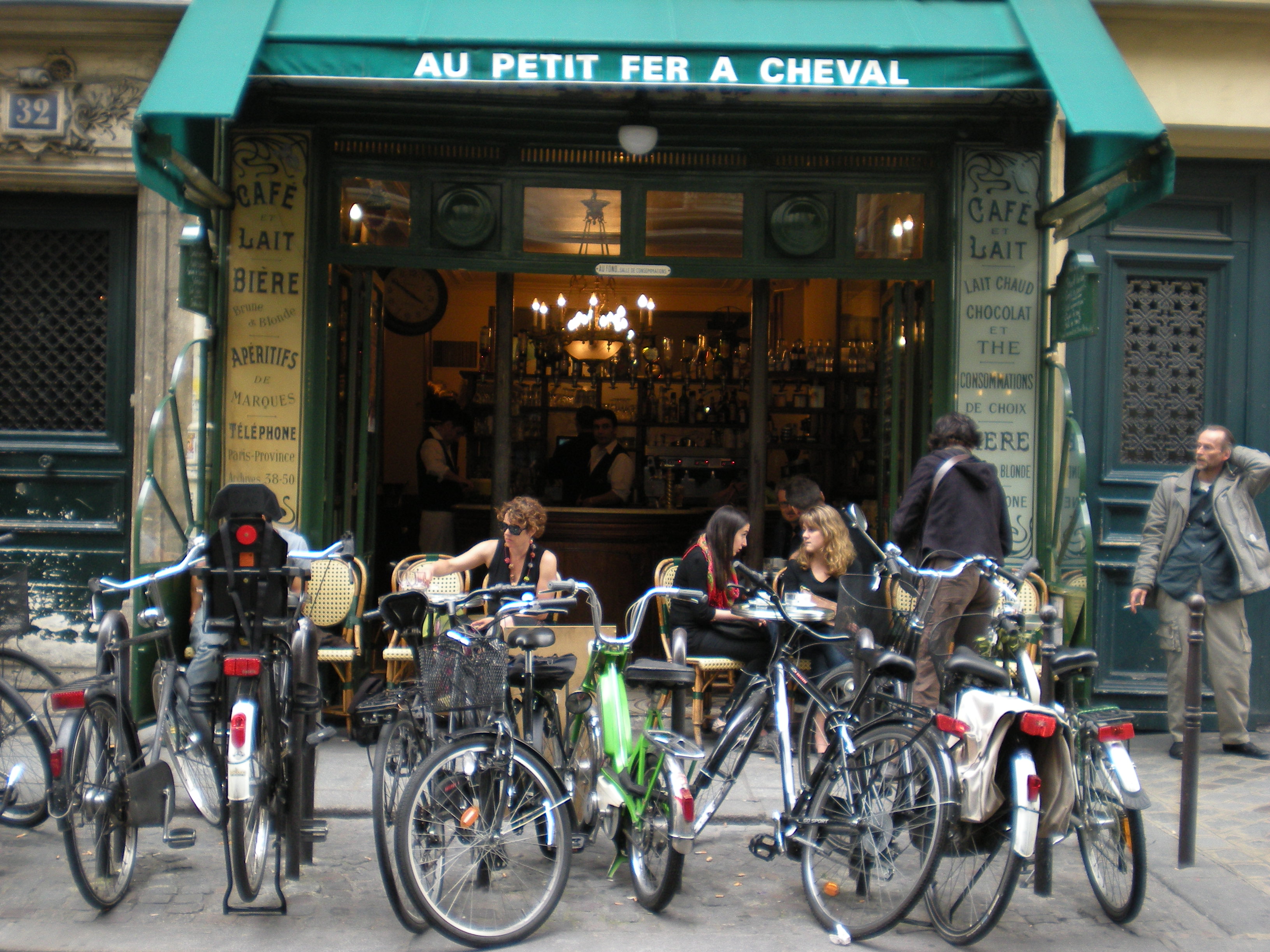 I met with Cynthia at 14:00. We had 2.5 hours before we needed to be at the train station to pick up Joao. We had lunch. Un Crépe Complete (my first and it was the cheese bomb… oh ho hooo). Then we stopped at a cafe and ordered wine, instead of coffee, to help to manage C’s “OMG, I can’t believe that I’ll see him so soon!” jitters. We made our way to the train station where we checked the boards for his train arrival location (getting ready to do a lot of this), 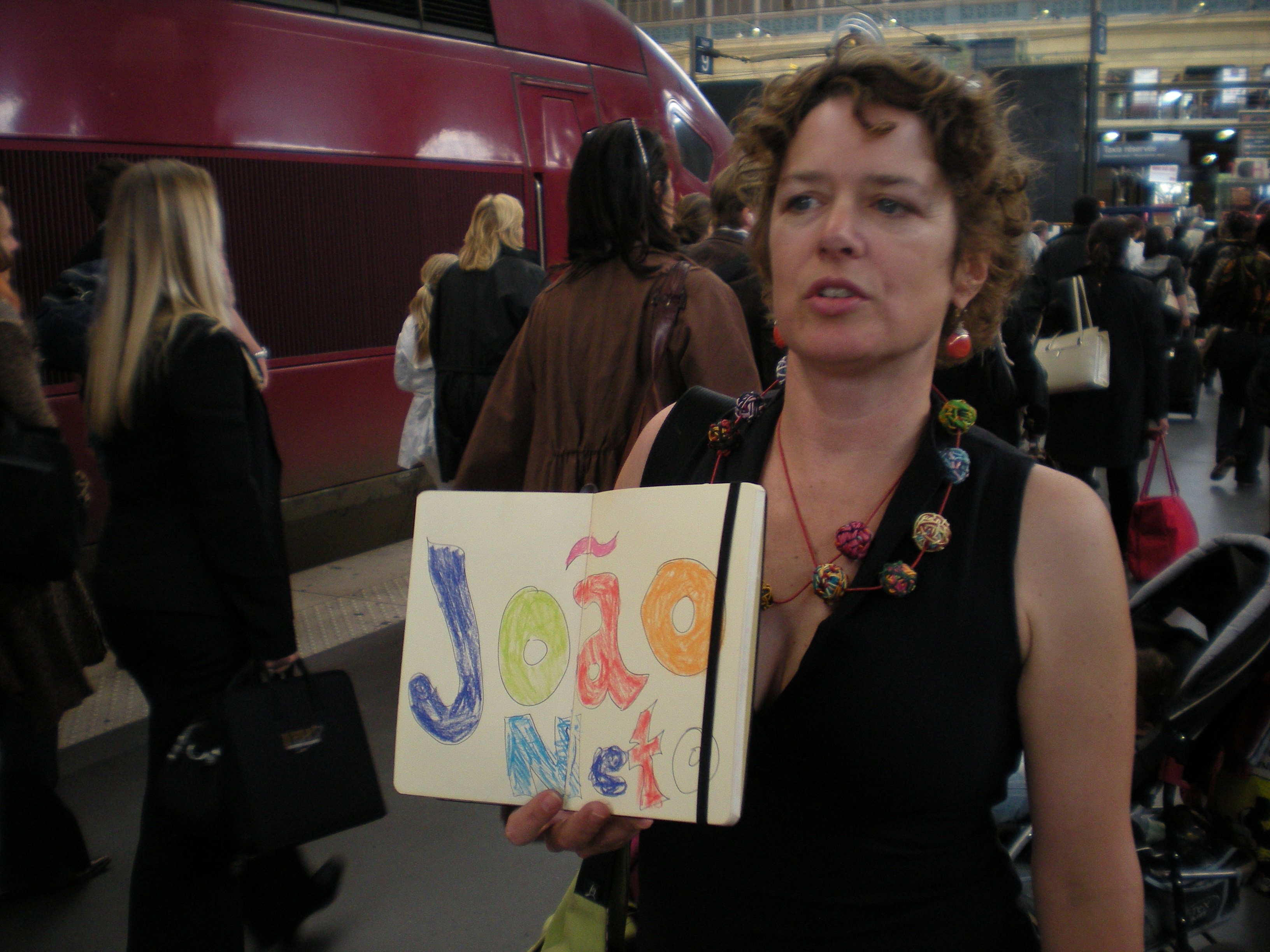 C made a sign (totally unnecessary) and I practiced reciting numbers in French to help her survive the wait.

I videoed (not mine) as they reunited. So sweet. They have a hotel for the night and I’m again on my own.

Off to picnic with the couch surfers now.
Love! I carry you with me in my mind’s pocket.