Another City, Another World. 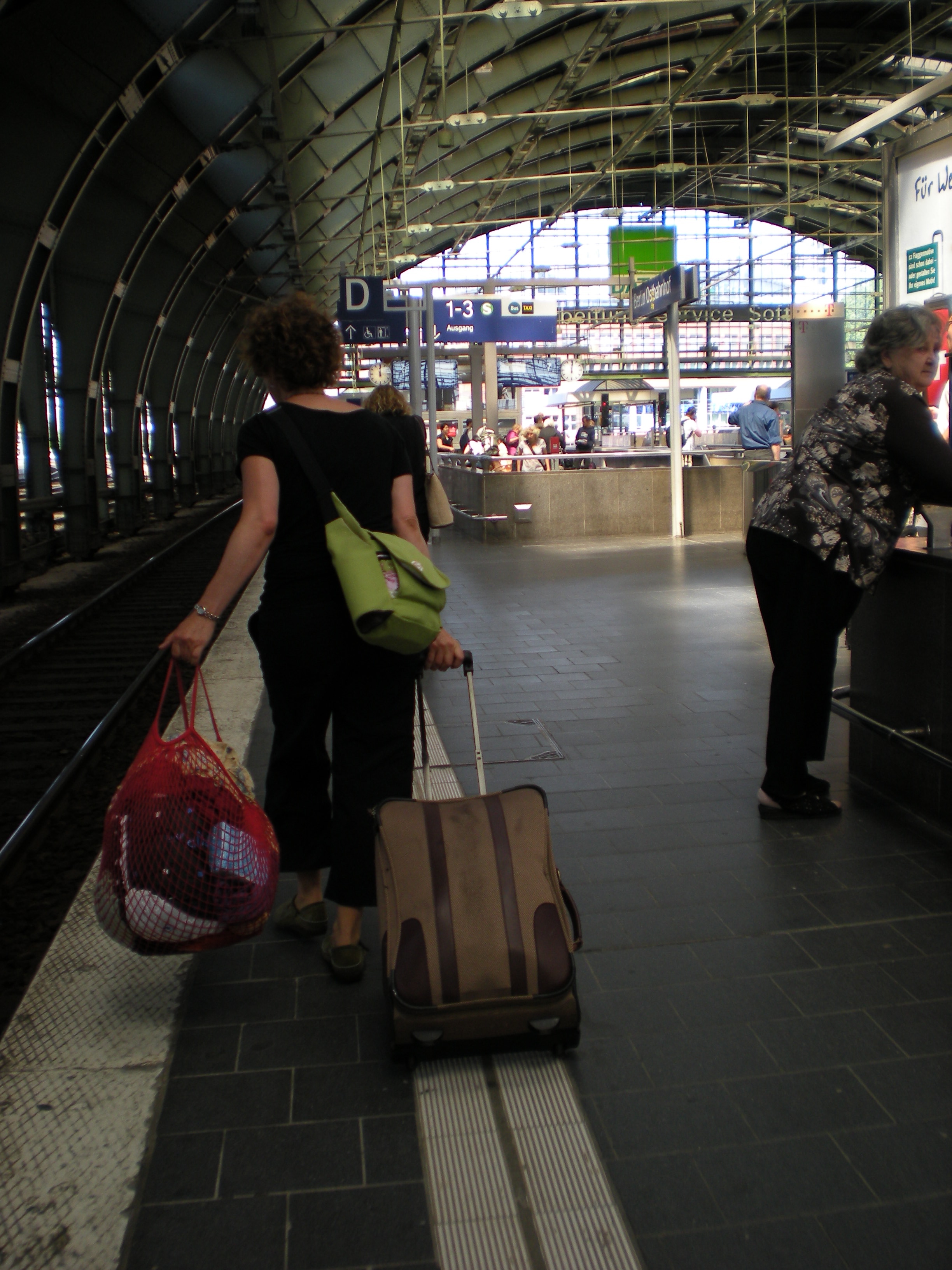 We hauled our luggage from the train station, through town, onto the tram and up the stairs to the apartment we rented only to find that the owner got the dates wrong and was not expecting us for a week. Alfred is a transplant from New York city that claims he brought the Bagel to Europe. Self named “The Bagel King” has lived in Amsterdam for the past 30 years and at some point opened a “bagel factory”. Cynthia tells me that he married a Dutch woman and that’s why he’s here. We were lucky that Alfred is not an asshole. Regardless of who is right and who is wrong, being cast out onto the street sucks just the same. He ordered up a room at his friend’s bed and breakfast for us and called us a cab.

The bed and breakfast is in a completely different part of town, so the taxi ride is really long and entertaining. I can’t believe how fast people drive here… it’s not much faster than I drive, but it’s the fact that they don’t slow down for pedestrians or bikes, or narrow roads, or anything.This was a welcomed adventure, even before I learned that we were staying at the Happy Hooker! 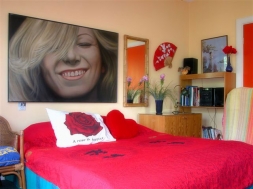 Xaviera Hollander is a Dutch woman that moved to NYC in the 60s and became a famous and successful Madam. She wrote the book “The Happy Hooker” which became a best seller at some point. She’s extremely proud and offers us a signed copy at a discounted price. I declined, but took some time to leaf through one of her more recent books on how to please a woman. The place is adorable and our room is perfect, complete with a balcony and a huge painting of Xaviera on the wall.  She’s got photos of herself everywhere, including one with a breast exposed, by the breakfast table. 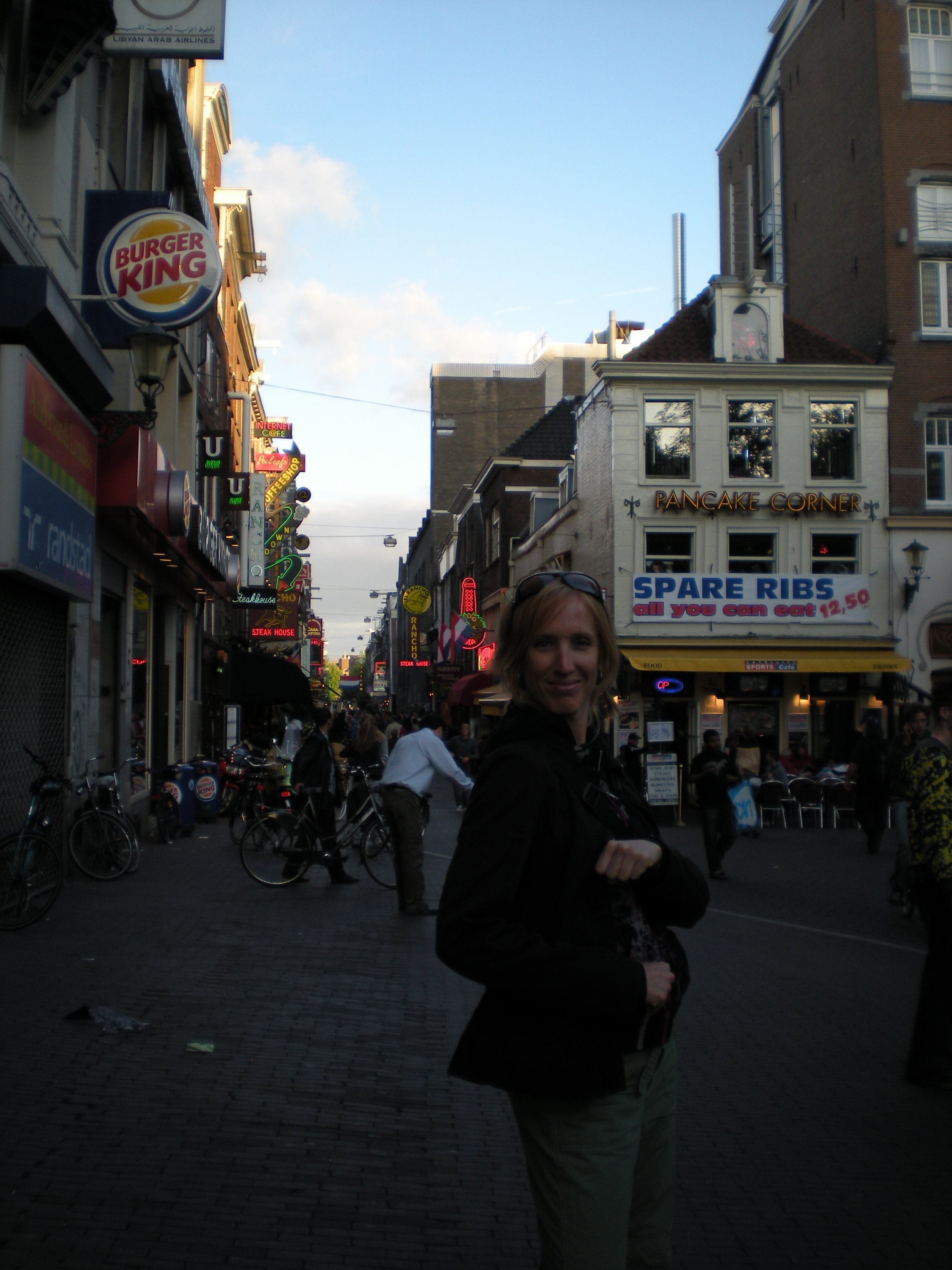 We dropped our stuff off and hit the streets for dinner. We found a tram which took us directly to the heart of things. Little passageways filled with tourists and lighted signage calling people into Restaurants, Bars, Coffee Houses and “Coffee Shops”. Cynthia gives me the lowdown that the difference between a House and a Shop is that a shop doesn’t serve coffee. We stopped into a Greek Restaurant and had an incredible meal and a half carafe of house red. After that we started to wander and head away from this tourist trap where stoned teenagers flit through doorways. We don’t wander far before we see a place with a sign that says “Noon” and hope that it’s what we are looking for. 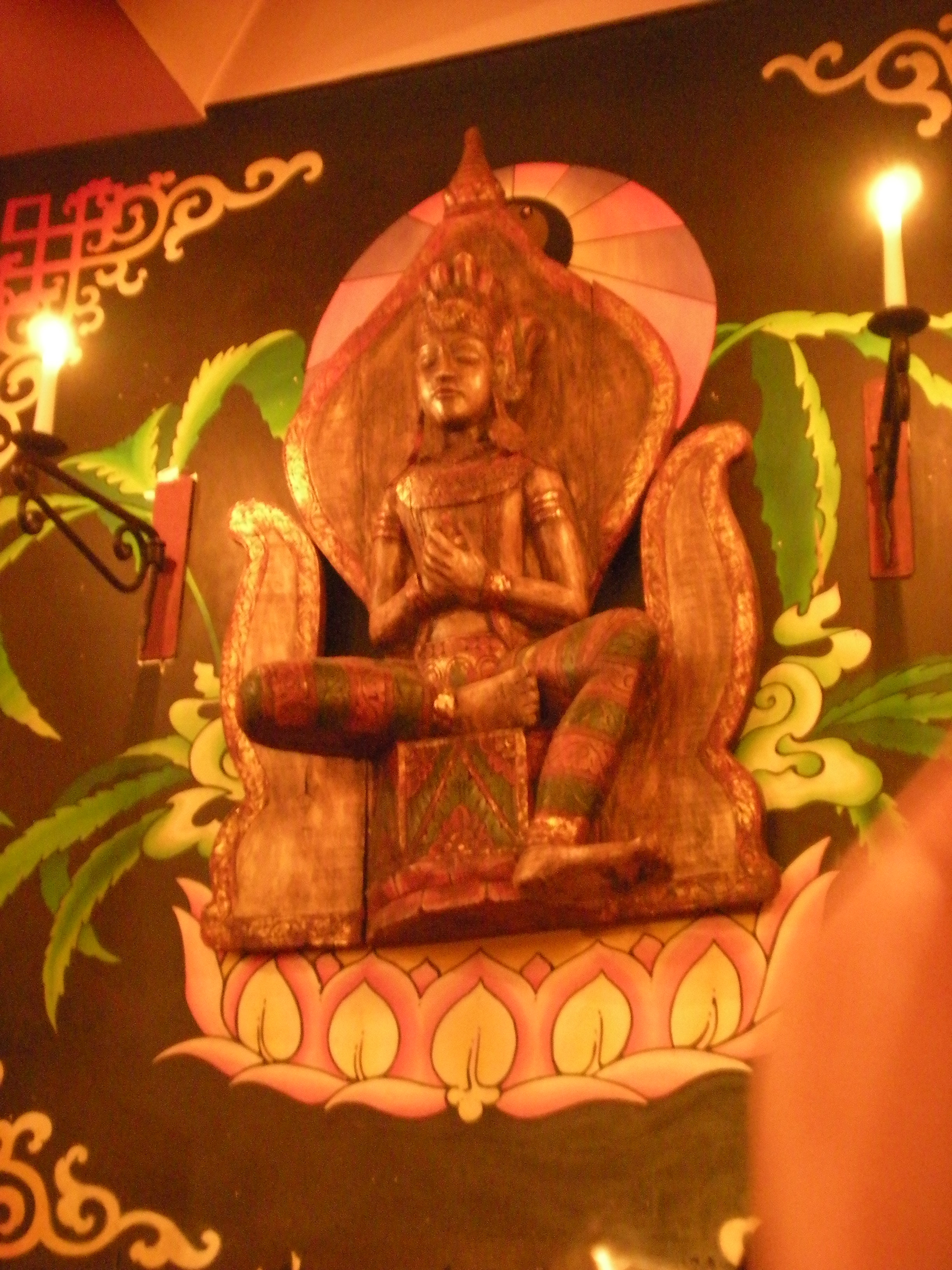 As soon as we stepped through the doorway, we knew that this was our place. Apparently, this makes me a big DORK, but I stepped up to the counter and announced that I just arrived in Amsterdam and that this is the first time I’ve been to a coffee shop. Of course add my usual over-excitement to this scenario and… maybe I was a dork. But ask yourself how are you going to get the full low down if you try to act all cool like you’ve done this a million times before. He gives us a menu, but I can’t tell one thing from another. Orange Haze, NYC Diesel, White Widow, Grapefruit, Blueberry, White Melon… I asked the proprieter for help and he narrowed it down into categories for us. “Do you want high, mellow, stoney?” he asks. “Mellow”. They were running a deal, instead of 10 Euro for 1 gram, add a gram for just a Euro more! So we ended up with more pot than I would usually be able to smoke in a year.  We rolled our own joint and took a seat in a loungy booth toward the back of the small space. We lit it up and the most amazing thing happened. Cynthia and I stopped fighting! Ahhhhh. After an hour or so, we motivated back out onto the street, where I totally blow Cynthia’s cool-cover once again. 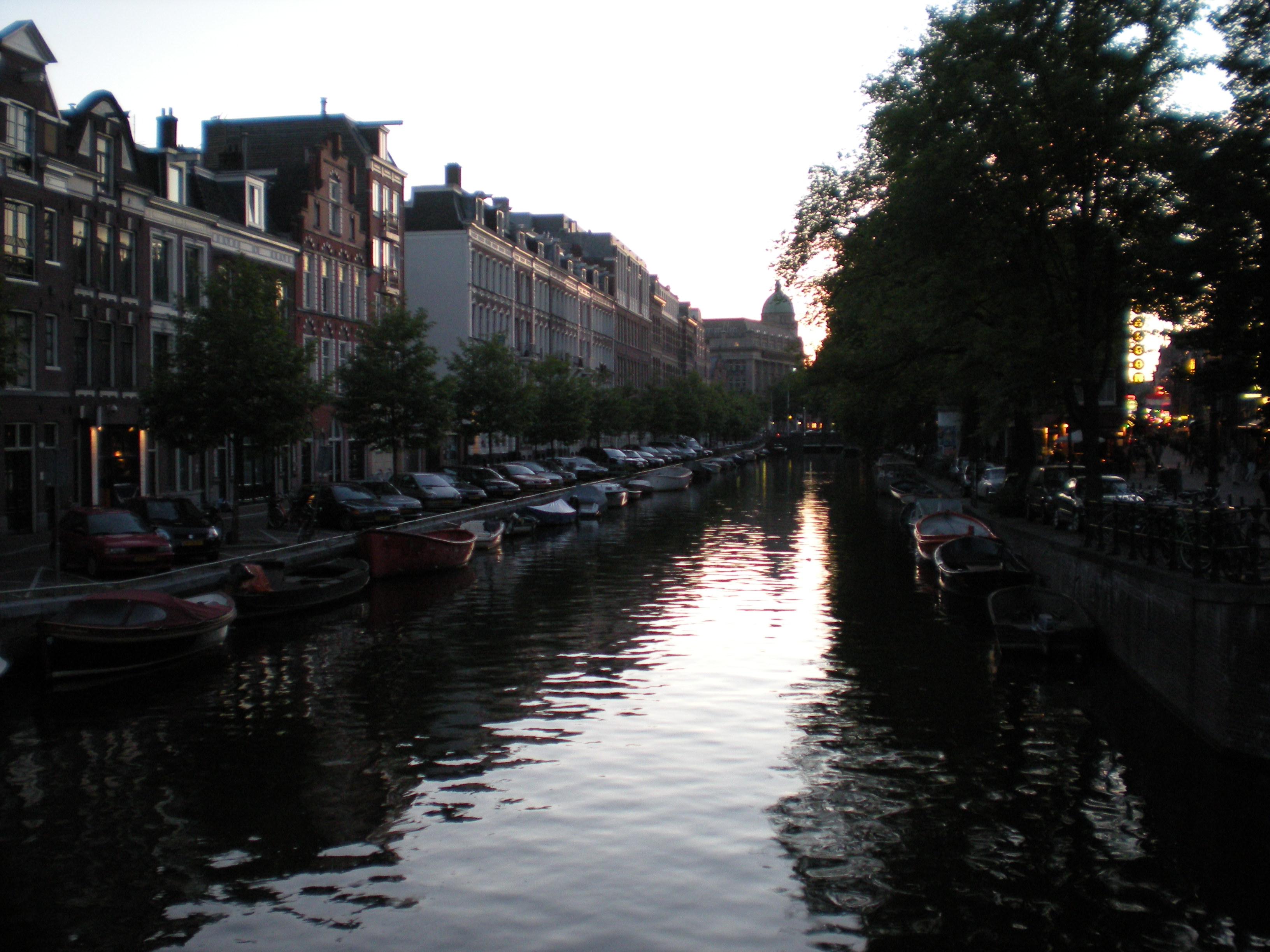 I seriously couldn’t stop laughing. Marijuana hasn’t been this funny since high school. Someone from across the way pointed at me and said, “man, she’s really stoned” which sent me into hysterics. The rest of the sensation and experience was completely wonderful. I was clear, content and very happy. The laughing was becoming a bit much, though, so we stopped into a bar to get a drink and mellow out. This wasn’t a bad idea, but it really didn’t do much to stifle my joy. After that, we begin to wander the streets aimlessly, something I have always enjoyed, but Cynthia mostly avoided on our trip until just now. 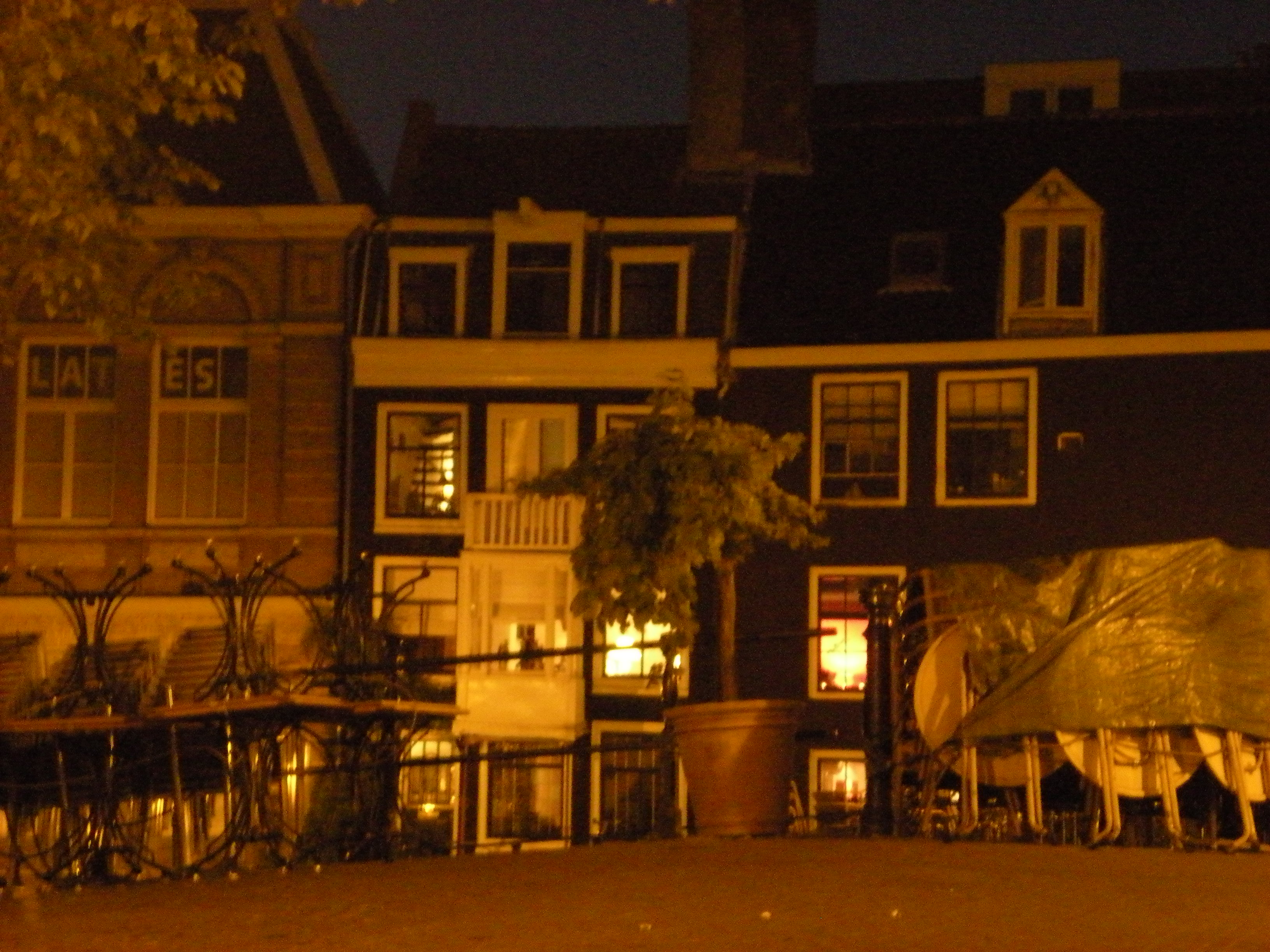 The Scenery is Surreal

The flowers look almost fake (you could probably accidentally drop a seed on the ground here and it would sprout). The reflections of the street lights on the surface of the canals wiggle and twinkle. The quaint little store and home fronts look like gingerbread. It was late, so with the exception of some passing bicyclists, we had the streets pretty much to ourselves (this would never happen in Berlin). Each time we crossed over the canals on a bridge we stopped to behold the scene. It is so surreal here. It’s like being transported into another time… another world.

We slept well at the Happy Hooker. We were served croissants, yogurt, coffee and orange juice. While I ate, I watched Xaviera’s toy poodle do a doodle outside and suddenly realized that the five huge potted plants that are rustling in the breeze are pot plants. In Amsterdam, each person in a household is allowedfive plants. What does one person do with the product from five plants?

It’s a perfect day and Cynthia says that it’s supposed to be like this the whole time we are here. We took the tram back to our clean and perfect little apartment, unpacked and headed out.