By Denise DambrackasApril 7, 2016Uncategorized
No Comments 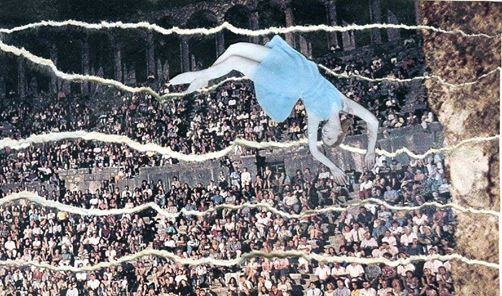 It was 1999. This chick Michelle was staying with me for a little while, maybe a month, making collages out of old 50s magazines and drinking cheap wine, on most days. I was just going about my normal life, sort of accommodating her adult, artistic development and enjoying her company. One night, we were in the living room smoking weed. I knocked over the bong, or maybe she did. I panicked and recalled what my mother showed me once, in order to preserve the immaculate white carpet in her upper-middle-class home. I quickly gathered all of the supplies that I needed to save the stained, 15 year old carpet, in that shitty rental, which would later be leveled to build condos. I got down on my hands and knees, poured water over the spill and furiously began squeegeeing diluted bong juice into a towel that I had rolled up at my knees. I was just high enough to have zeroed in on this, my only mission. There was a sudden break in the action and I looked up at my friend, who sat on the sofa. She was just staring at me with a tilt to her head, like she’d never seen anything like it before. I tried to play it all off like every decent person that cares about the place they live in does these kinds of things. But inside, I was terrified that there was a neurotic force born into me, that I might never fully be free of.